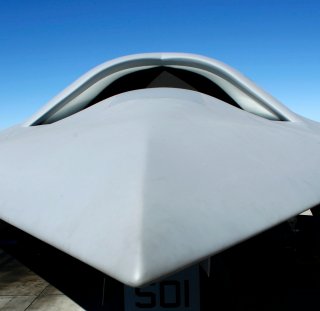 In a just-released advertisement, Northrop Grumman drops a hint at what might be their entry into the Next Generation Air Dominance (NGAD) program, an effort to field a sixth-generation combat aircraft.

The fifteen-second spot (a longer, sixty-second version covers more of Northrop Grumman’s activities) begins with elevator doors opening into an aircraft hangar. The first airframe we see? Potentially Northrop Grumman’s NGAD entry. Though we see the airframe only briefly, a few important details can be made out.

A bubble canopy sits atop the airplane’s fuselage, with apparently enough cockpit space for a single pilot, potentially ruling out two-pilot flight. Also immediately apparent is the airframe’s prominent nose chine, a standard feature on stealthy airframes, which runs the entire length of the aircraft and blends into the wing roots.

The airframe seems to lack any kind of vertical stabilizer or ruddervators, potentially a tailless design. A single-engine intake can be seen from the video angle, but it is unclear if the airplane is a single or dual engine design.

It should also be mentioned that an aircraft in the hangar background can be seen taking off into the sky—and strongly resembles the company’s latest bomber, the highly stealthy B-21 Raider bomber.

Despite the similar nomenclature, the two programs are very distinct aircraft.

The Air Force sees their NGAD program as a successor to the successful F-22 Raptor air superiority fighter. However, NGAD will be capable of “penetrating counter-air platforms with multi-domain situational awareness, agile resilient communication, and an integrated family of capabilities.”

The Navy’s NGAD program, on the other hand, makes clear that their carrier-capable fighter will fly sorts with loyal wingman-type attritable unmanned aircraft in tow, acting as a quarterback. The F/A-XX’s loyal wingman aircraft would act as the manned airplane’s eyes and ears, detecting threats on the ground and in the air, relaying that information back to the pilot, and entering contested airspace in the F/A-XX’s stead.

Though a brief view of an aircraft not yet in production is perhaps not authoritative, it nonetheless gives a tantalizing first look at what could be the United States Next Generation Air Dominance aircraft.