Norway’s Naval Strike Missile is a Favorite with the Navy and Marine Corps. They Want More. 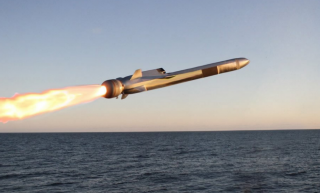 In response to a surge in demand in the United States and worldwide, missile production will increase. In the future, the Naval Strike Missile (NSM) could feature some improvements as well.

The NSM is a potent anti-ship missile. It’s fast, features a somewhat stealthy nosecone, a long range, and the ability to target ships beyond the horizon.

The Navy first took notice of the Norwegian-designed missile several years ago, quickly equipping several ships stationed in the Indo-Pacific region with it. The Navy wasn’t the only branch excited by the missile’s capabilities, however.

In recognition of the NSM’s potential, the U.S. Marine Corps is experimenting with different NSM configurations to augment the Marine Corps’ anti-ship capabilities. Though traditionally a task undertaken by the Navy, the Marine Corps has mated pairs of NSM missiles to their Joint Light Tactical Vehicle on several occasions. In this configuration, in theory, a remotely-controlled JLTV could station itself on remote islands throughout the Indo-Pacific region, denying enemy ships the use of land and surrounding waters.

The over-the-horizon missile is a potent ship-killer—and one that China has taken notice of.

The United States Navy equipped several of their Littoral Combat Ships with the Naval Strike Missile earlier this year, giving the ships a potent anti-ship capability. One of China’s leading shipbuilding industry research bodies commented on the NSM-LCS pairing, stating that “modular weapons [like the NSM] can reduce ship construction costs while weapons manufactured with the same interface standard can be easily installed on ships that meet this standard,” according to a 2020 Chinese government research paper on the U.S. Navy’s strategy, which was published by the Marine Design & Research Institute of China.

“This is extremely conducive to boosting the ship’s overall capabilities, while ease of maintenance and ability for rapid retrofitting are greatly enhanced,” according to the study.

Kongsberg Senior Director for Special Platforms and Missile Systems Steve Schreiber told Defense News that regardless of demand, the company can set up additional missile production facilities to meet demand in the United States and abroad. “Demand is not an issue. If they suddenly come out and they say we need 200 a year, 300 a year, 500 a year, we can do that,” the director said. For the U.S. market, Kongsberg partners with Raytheon for NSM production.

Though the Naval Strike Missile’s range is listed somewhat ambiguously at over 100 nautical miles, the U.S. Navy is reportedly interested in NSM performance improvements. The same Kongsberg official explained that the Navy is “always looking for more range, so more efficiency in the fuels, more efficiencies in the motors,” more or less ruling out improvements in other areas.

“The computer systems in this are pretty dang up to date, so they’re not looking at doing anything with that,” Schreiber said. “They might be looking at a few other areas.”