Not Dead Yet: Why Modern Tanks Will Still Dominate the Battlefield 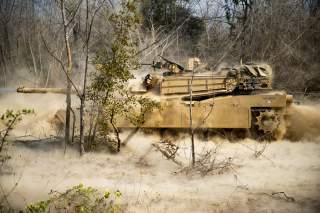 It was 40 years ago this month that the death of the tank was announced. The iron monsters had blitzed through Sedan, Kiev and Tobruk in World War II. In 1967, Israeli armor had swept through the Sinai like lightning. And then in October 1973, hundreds of burning Israeli tanks, draped in anti-tank missile guidance wires, signaled that something had changed.

The Yom Kippur War spurred critics to ask why armies were spending vast sums of money on vehicles that could be destroyed by a single determined infantryman with an inexpensive weapon. Perhaps it was a sort of Schadenfreude, revenge for a decades-long panzer terror.

The king of battle had been bested by puny infantrymen armed with Soviet-made wire-guided anti-tank missiles and rocket launchers. That the vaunted Israeli armor had been decimated by Arabs only made the technology seem more impressive. Also not coincidentally, the 1973 war occurred just as the U.S. had finished a long, unsuccessful jungle war where armor could play only a supporting role.

But it turned out that the initial coroner’s report on the tank was wrong. “It never made any sense,” says military analyst Tony Cordesman, who had been dispatched by the Pentagon to study the conflict.

While the Israelis had suffered heavy tank losses, many of those came at the beginning of the conflict, a result of a lethal mix of desperation and overconfidence. In the opening days of the October War, in a desperate bid to rescue their outposts along the Suez Canal, the Israelis had sent their armor — without infantry, artillery or air support — against fortified anti-tank defenses.

The Israeli Defense Forces could have learned from the British, who had seen their gallant armor decimated in boneheaded charges against Rommel’s 88-millimeter guns some 30 years before. At the same time, the Egyptian assault formations that crossed the canal had been heavily reinforced with anti-tank weapons stripped from other Egyptian units — bad luck for the initial Israeli counterattack, but a boon for the later Israeli counteroffensive that struck weaker Egyptian defenses.

As is their custom, the Israelis adapted in 1973, and scraped together infantry to support their tanks. There were no ‘67-style blitzkriegs in that war, but using infantry and artillery to suppress Arab anti-tank defenses resulted in much fewer losses for IDF armor.

The Yom Kippur War did not prove that tanks were obsolete; it merely restated the lesson of Cambrai in 1917 and Kursk in 1943, which is that armor must operate as part of a combined arms force of tanks, infantry, artillery and other units. Tanks may be the star player, but war is a team game.

Ironically, the Yom Kippur War led to a renewal of the tank. U.S. forces in Europe had long been a human tripwire for the use of nuclear weapons, which were thought the only means for outnumbered NATO armies to stop an invading armada of Soviet armor.

But if Israeli tanks were vulnerable to anti-tank missiles, then so were Soviet tanks, whose supply lines could also be disrupted by aircraft armed with the precision-guided munitions that were used effectively at the end of the Vietnam War.

And so was born the AirLand Battle concept, which combined maneuver warfare by heavy mechanized forces, plentiful anti-tank missiles and air strikes to interdict Warsaw Pact reserves and supply lines.

The Yom Kippur War “combined with American withdrawal from Vietnam and a decided shift toward the Soviet Union with American military strategy, caused a renaissance, so to speak, within Army circles that helped to produce TRADOC and the DePuy reforms,” says Col. Gian Gentile, who was written about the atrophying of U.S. armor skills since 9/11. “Which of course then led to active defense and Airland Battle doctrines, both premised on heavy tanks and mechanized maneuver warfare.”

So how has the tank fared since 1973? In the 1991 and 2003 Iraq wars, American and coalition armor did well, though the opposition was nothing like what the Israelis faced in 1973. In numerous Third World conflicts, such as Angola and the Iran-Iraq war, armor played a useful but not decisive role. Canadian tanks performed well in Afghanistan, as did U.S. armor battling Shia militants in Sadr City in 2008.

Yet a disquieting note was the Israel-Hezbollah war of 2006, where Israeli tanks — including the heavily armored Merkavas — were roughly handled by entrenched Hezbollah forces using advanced Russian anti-tank weapons. But as in 1973, it seems that poor Israeli tactics and overconfidence were more to blame.

And the future? As U.S. military power is increasingly projected by drones and Special Operations Forces, and war becomes manhunts and targeted assassinations instead of open field battles, will tanks have a role? “Folks who have fallen in love with Special Operations Forces, such as RAND analyst Linda Robinson in her recent Washington Post op-ed would certainly agree that the tank has seen its day, partly due to such weapons as the ATGM,” Gentile says.

“But the bigger point here, I think, is that there is still a necessity for heavy armored vehicles for ground combat in American military strategy,” Gentile continues. “This is not to say that the M-1A2 Abrams will live forever in the dreams of armor officers waiting for a Soviet incarnate to attack through the Fulda Gap bringing about World War III.”

Since the first clumsy British Mark I tanks clanked into battle at the Somme in 1916, there has been a race between tanks and anti-tank weapons. For a time after 1973, it seemed that like the tank-killers had the upper hand, though advanced armor plate and active countermeasures such as Israel’s Trophy system have helped restore the balance.

The spread of advanced guided weapons, especially to non-state forces such as Hezbollah, has made the battlefield more dangerous than ever. Which is why RAND analyst David E. Johnson, who has written several papers on the future of armor, believes that tanks are more necessary than ever. “My sense is that ATGMs have made the battlefield — be it irregular, hybrid or high-end war — too deadly for anything but tanks and similarly armored vehicles. As an Israeli told me when I was doing research on Hard Fighting: Israel in Lebanon and Gaza, nothing else can survive on the battlefield.”

With their survivability, long-range weapons, sensors and ability to deliver firepower accurately, tanks provide vital muscle for lighter troops such as Stryker brigades and leg infantry fighting irregular forces, Johnson writes. “In the two most recent cases of hybrid warfare — the 2006 Second Lebanon War and Operation Cast Lead in Gaza — heavy armored formations were the only units able to maneuver on a battlefield where an adversary had an effective standoff weapons capability, particularly [anti-tank guided missiles] and [man-portable air-defense systems].”

In the end, tanks are as much concept as technology: the belief that combining firepower, protection and mobility creates a uniquely powerful system on the battlefield. Perhaps someday, powered armor from Starship Troopers, or what Special Operations Command is developing will replace tanks. On the other hand, whatever a man can carry or shoot, a vehicle should be able to carry or shoot more of.

Perhaps more likely is that there will be unmanned tanks, small, light and cheap. But armor will survive. The tank was humbled in 1973, but not vanquished.

This article by Michael Peck originally appeared at War is Boring in 2013.