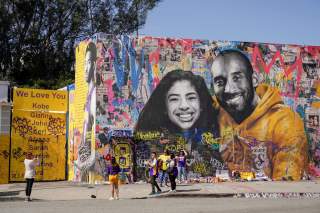 Women have made great strides in the world of sports over the past 50 years.

Especially in some individual sports, female champion athletes today earn far more money and command a much bigger audience than their predecessors – thanks to breakthroughs by tennis champions like Billie Jean King and Venus and Serena Williams and top golfers such as Kathy Whitworth, Nancy Lopez and Michele Wie.

We are fans of women’s basketball and scholars who study the role that gender plays in sports and the changing status of female athletes. Despite massive changes in attitudes toward women who excel at sports overall, with few exceptions we’ve observed that the disparity between what adolescent boys and girls can aspire to accomplish in professional basketball today remains enormous.

This gap has become more visible due to the deaths of retired basketball legend Kobe Bryant, his daughter Gianna and two of the other girls on the basketball team he coached in January.

Known as “Gigi,” the 13-year-old by all accounts inherited not only her former NBA player father’s love of the game, but silky smooth moves as well. She aspired to attend the University of Connecticut where she would play on its highly ranked women’s basketball team. Mourners spoke reverently about Gigi’s intentions to play professionally and carry on her father’s legacy during a star-studded memorial service for both of them held on Feb. 24.

Gigi Bryant, here wearing a No. 2 jersey on the Mamba team, was already a youth basketball star before her death at age 13.

Women began playing basketball in 1892, one year after the sport’s emergence.

Women’s basketball started as a passing game with its own peculiar rules. The court was divided into three sections and each team fielded nine players, versus the five who play on the court today. Players could not move out of their assigned area, were restricted to three dribbles, and could only hold the ball for three seconds. Players were also generally advised against engaging in strenuous activity as the medical experts at the time were convinced that overexertion would damage women’s fertility.

In 1896 teams from Stanford and the University of California, Berkeley competed in the first women’s intercollegiate basketball game. Women kept playing basketball despite the perceived health risks.

One of the most famous women’s amateur basketball teams of the 1930s was the Golden Cyclones of the Employers Casualty Company of Dallas, which was led by track and field Olympic gold medalist and champion golfer Mildred “Babe” Didrikson Zaharias. The first professional women’s basketball team was created in 1936. The All-American Red Heads barnstormed the country for more than 50 years.

Although the players were required to wear makeup and either dye their hair red or wear red wigs, the team played by men’s basketball rules against men’s teams. Despite the popularity of individual teams like the All-American Red Heads, women’s professional basketball struggled to gain a firm footing for decades.

By that time, rules for women had become about the same as for men.

Kobe Bryant and his daughter Gigi believed that she would achieve great things as a basketball player.

The advent of a new federal civil rights policy enacted in 1972 changed the world of women’s sports. What became known as Title IX was originally intended to provide equal opportunities and access for women in fields such as science, medicine and law.

In practice, Title IX forced high schools and colleges to open up more opportunities for female athletes and to spend more money and attention on girls’ and women’s sports teams.

But it would take more than 20 years for the emergence of a women’s professional basketball league.

The American Basketball League proved short-lived, ceasing operations in 1998 after only three years. The Women’s National Basketball Association, known as the WNBA, is entering its 23rd season this summer.

The WNBA and pay

Despite the WNBA’s staying power, its players until now have only earned an average salary of US$71,000, little more than 1% of the $6.4 million their typical male counterparts on NBA teams take home.

Average pay for WNBA players, however, will soon nearly double to about $130,000 a year, and some of the league’s star players will be making $500,000, following a collective bargaining agreement. Players will now be eligible for maternity leave at their full salary, and can become unrestricted free agents after five full seasons.

Attendance at WNBA games now averages about 7,000 per game, compared to 18,000 at NBA games. The disparity in terms of the sports finances through TV deals and licensing agreements is much larger than that. The women’s league generates about $60 million in revenue, just a tiny fraction of 1% of the NBA’s $7.4 billion revenue.

What will it take to bridge the huge gender gap in professional basketball’s popularity and pay?

We think that it could take a player like dunking sensation Stanford freshman Fran Belibi who has captured significant media attention. Sabrina Ionescu, senior point guard for the Oregon Ducks, is another potential gamechanger.

Ionescu was named national player of the year in 2019 as a junior. She has broken the National Collegiate Athletic Association’s triple-double record for college women and men. Ionescu had trained with her close friend and mentor, Kobe Bryant. And Golden State Warriors star player Stephen Curry has brought his daughters along to watch her play.

Or maybe it will take parents like Kobe Bryant and Curry, born after Title IX changed so much about athletics, to instill in their daughters an understanding that a sports career is not only feasible for women, but within reach.