Not Just the Blitz: Remembering London's Other Air Raids 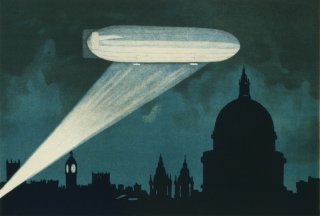 For eight months, from September 7, 1940, to May 11, 1941, the United Kingdom faced the Blitz, the German bombing campaign that was meant to force the British people into submission. Upwards of 43,000 civilians were killed and more than two million houses were damaged or destroyed and some sixty percent of those were in London. While the terror bombing was conducted on cities throughout the British Isles, London suffered the brunt of the nighttime attacks facing seventy-one raids.

However, the bombing of London had first occurred a generation earlier during The Great War—later to be known as the First World War. As would happen in the Second World War, other cities were targeted but the great capital of the British Empire was the primary target and it suffered through the first sustained strategic bombing campaign in history.

The raids actually included the use of airships, early bomber aircraft, and even seaplanes—and while the Blitz lasted for months, during the First World War the air raids on the UK took place from December 1914 to August 1918 and resulted in almost 5,000 casualties.

Striking at the Heart of the Empire

For centuries the British Isles had been protected by the English Channel and the North Sea. In fact, the Battle of Fishguard during the War of the First Coalition against Revolutionary France was the last time that a hostile foreign force had even landed in the UK. That campaign, the "last invasion of mainland Britain" took part in West Wales and lasted just three days from February 22 to 24, 1797.

It had been nearly a century and a half earlier that London was even threatened, when during the Second Anglo-Dutch War in June 1667, the Dutch Navy carried out the Raid on Medway, which took the English fleet by surprise.

Throughout the nineteenth century, even as the Royal Navy and the British Army took part in distant campaigns, the residents of London could feel safe that the war wouldn't come to them. That of course changed in 1914, in part because at the start of the war, Britain was ill-prepared to deal with the threat from enemy airships and aircraft. Traditionally, the home defenses of the UK focused on defending the coastline rather than its airspace.

Making matters worse was the fact that the Royal Flying Corps (RFC) was operating overseas and that left few aircraft to defend the skies over Great Britain.

The first aerial threat wasn't from airplanes, as in the early days of the war Germany lacked any bombers that had the range to reach London. Instead, it was German airships—known as Zeppelins named after the German inventor Count Ferdinand von Zeppelinthat conducted the first aerial attacks against the British Isles. While slow moving, they could fly at 11,000 feet and turn off their engines so that they could drift silently over their targets.

Airships made fifty one bombing raids across Britain during the war, dropping 5,806 bombs and killing 557 people, and wounding another 1,358. Although the military effect was small, throughout 1915 and into 1916 there was great public outcry and government embarrassment that London could be hit by the enemy.

Until the summer of 1916, Britain struggled to offer an effective response, but then with the introduction of new explosive and incendiary ammunition, the advantage swung in favor of the British. It was on September 3, 1916 that the first airship, Schütte-Lanz, SL.11, was shot down. In total eighty-four German airships took part in the raids over the skies of the UK, of which 30 were either shot down or lost in accidents.

Even as the German Naval Airship Division retained faith in its airships, just nine raids were carried out against the UK in the final two years of the war. The German Army, however, abandoned the use of airships. It turned to a new weapon.

In June 1917, the first air raid involving the huge German Gotha bomber aircraft occurred. That daylight raid resulted in 162 deaths and 426 injuries, the most of any single air raid on Britain. To meet the new threat, the British pilots had to adopt new tactics in aerial combat.

This included the use of wireless communication, couple with sophisticated observation and the reporting of enemy movements. This enabled the fighters to be dispatched to meet the bombers, while anti-aircraft guns and barrage balloons forced the bombers to fly higher. By May 1918, more than sixty Gotha bombers were destroyed and the aerial threat to Britain and London specifically seemed to be over—at least until 1940.