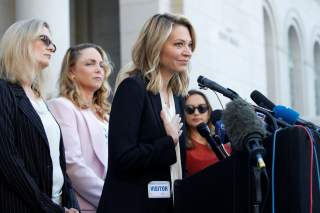 The Harvey Weinstein guilty verdict is a victory for the #MeToo movement. “Today is a powerful day & a huge step forward in our collective healing,” wrote the actress Rose McGowan on Twitter.

Still, sexism is pervasive in American culture. About 40% of U.S. women say they’ve experienced gender discrimination at work. Women’s work is often undervalued and underpaid. And female job candidates are frequently subjected to extra scrutiny during the hiring process, and have lower chances of landing the work they deserve.

We are scholars who study how conditions in the workplace can contribute to health inequities and gender discrimination.

Research shows that sexism takes a large toll on women’s health, but women work at a variety of jobs where hours, expectations and cultures vary widely. While the Weinstein verdict may acknowledge the injustice of criminal sexual acts – and by extension, acknowledge the entire #MeToo movement – holding him to account took the efforts of more than 80 women, multiple investigative journalists and significant resources to pay attorney’s fees. For women without such resources, successfully challenging sexism can be much more difficult.

Level of education makes a difference

Our recently published study used 12 years of data from the General Social Survey, or GSS, to look into workplace discrimination in the U.S. – and just as critically, how that discrimination affects women’s health and well-being.

Specifically, we wanted to know if women’s levels of education influence whether they experienced gender discrimination at work. In the 1980s, the number of women earning college degrees surpassed men. Since then, women have obtained advanced degrees at record rates. We wondered if women’s educational achievements altered their chances of encountering sexism at work. And because higher education generally opens the door to more financial and social resources, we wanted to know whether increased education helps women deal with the negative consequences of discrimination.

In the GSS, about 10% of women reported gender discrimination in their current job. Consistent with other research, women with higher levels of education reported higher rates of discrimination. Among those with master’s or doctoral degrees, it’s nearly 13%; for women with less than a high school education it’s 7%.

Why the difference? The most powerful explanation: highly educated women working in high-paying, professional jobs are more likely to work alongside more men. And women in those contexts are more likely to be targets of gender-based discrimination and harassment.

Another reason: Women with less education typically hold less prestigious jobs, which offer fewer opportunities for raises or promotions. Trapped on the “sticky floor” of low-wage service or retail work, these women may not even have opportunities to collide with the glass ceiling. And they might recognize sexism less often simply because traditionally feminine traits – caring or deferring to others, for instance – are sometimes required of the job, expected or even taken for granted.

Lower-educated women may report less discrimination, but that does not mean all is well with them. Quite the opposite – we found that women in less-valued jobs actually show some of the largest health harms from discrimination.

On some level, that makes sense. Those with more education typically have greater resources for coping with stress. Those resources include higher earnings, greater social support and better health insurance coverage. Also, the data does not distinguish between degrees of discrimination. Women with less education might experience more severe or hostile forms of sexism, while women in better-paying jobs may face more inequality due to missed promotions or raises, for example.

Gender discrimination is unfair, illegal, bad for the economy and a public health issue. It hurts everyone, but it is much more harmful for poor and working class women. These findings should concern anyone interested in advancing health, well-being and social justice. And really, shouldn’t that be all of us?