Not True: Germany Wiped Out the Polish Air Force in Three Days in 1939 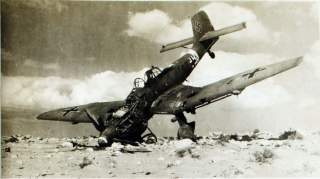 When the 1950s T.V. documentary series Air Power got around to covering the opening battles of World War II, it unfortunately reinforced a popular, and entirely incorrect, notion.

Despite being badly out-classed and out-numbered three-to-one, Polish fighters shot down a large number German aircraft in the chaotic early days of the conflict. Warsaw’s air arm resisted effectively for nearly a week — and, at reduced capacity, continued fighting for more than two weeks.

That’s a Hell of a lot more than three days.

The German Luftwaffe certainly made an effort to destroy Polish aviation on the ground — but the stubborn Poles refused to just roll over.

In 1939, the Polish air force relied entirely on domestically-produced aircraft but devoted just $2 in funding per capita to air power, compared to the $100 per capita Germany allocated.

Conceived primarily to support the army on the ground, the air force had one each independent fighter and bomber brigade and spread out the rest of its aircraft in mixed detachments assigned to ground formations.

There were 445 aircraft in combat units, with additional aircraft in reserve or training units. Not a huge number. But the Polish air arm did boast a strong pilot training program.

In 1939, the German Luftwaffe was unquestionably the most advanced air force the world. The main formations assigned to the invasion of Poland, Luftlotte 1 and 4, counted 1,302 aircraft between them.

Warsaw’s air arm also fielded 30 even older P.7 fighters. As war grew imminent, the Poles tried to acquire more-advanced Hawker Hurricane and MS.406 fighters from England and France, respectively — but at the outbreak of conflict, these were awaiting shipment and assembly through Romania, nominally a Polish ally.

The Luftwaffe deployed Ju-87 Stuka dive bombers for ground support. Though slow-moving and vulnerable, Stukas had already earned a reputation in the Spanish Civil War for the terrible howl of their sirens as they executed precision bombing attacks at near-vertical angles.

Finally, two twin-engine medium bombers — the older, pencil-thin Do-17 and the heavy-lifting He-111, famous for its all-glass nose — bombed cities and military installations during the Polish campaign.

The Polish bomber force was not as obsolete as the fighters were. Warsaw’s 120 P.23 Karas strike planes were only slightly inferior to the German Stukas, while the 36 twin-engine P.37 Łos light bombers in the bomber brigade were modern designs capable of attaining 280 miles per hour.

Battle of the secret bases

As Germany launched its unprovoked invasion early in the morning on Sept. 1, 1939, it made possibly the first attempt to wipe out an opposing air force on the ground by surprise attack — a strategy most famously executed by Israel during the 1967 Six Day War.

The Poles were not surprised. Tensions had been high enough that Polish air force units had mobilized a full week before the war. As hostilities broke out, the Polish squadrons relocated to a network of secret satellite airfields. They proceeded to launch hit-and-run attacks on German aircraft and tanks from their hidden bases.

The conflict nonetheless began inauspiciously for Polish aviation, when at 4:45 in the morning, a German Stuka shot down Capt. Mieczyslaw Medwecki of the 2nd Krakow Air Regiment as he was taking off in his P.11. It was the first aerial victory of World War II.

The German air force did happen upon a few of the bases by chance. For example, on Sept. 2 prowling Bf.109s discovered a camouflaged airfield near Lodz and strafed several aircraft on the ground, setting fuel stores ablaze. The crude state of the landing strips also led to high numbers of accidents and crash landings, accounting for the loss of 20 P.23s.

Still, the satellite airfields allowed the majority of Polish combat aircraft to escape destruction on the ground.

The Luftwaffe’s anti-airfield campaign did boast a few successes. The Germans hit the airfield in Rakowice on Sept. 1, destroying 28 aircraft — almost all of them outdated airframes no longer in service.

On Sept. 3, the Germans hit the P.37 base at Malaszewicze three times, burning down its hangars and most of the bombers belonging to the resident training units. On Sept. 5, Bf.109s destroyed three P.11s attempting to take off and another two in the air near the aerodrome at Widzew.

Large fleets of German bombers pounded Warsaw from the first day of the invasion. The Polish fighter brigade was airborne by dawn, and even managed to chase away a force of 80 He-111s heading for the capital city, shooting down six or seven German aircraft at the cost of four P.11s.

Though the German Bf.109 and Bf.110 escorts completely outclassed the P.11s, the Poles were still able to break through to the bombers. Polish colonel Leopold Pamula, after shooting down two aircraft, even rammed his P.11 into a third German plane before bailing out, pioneering a tactic later adopted by Soviet pilots.

The Polish reputation for chivalry was on display as Warsaw’s pilots refrained from shooting the parachutes of downed Germans. A Polish lieutenant named Skalski, after forcing down a German Hs.123 bomber, even landed nearby to make sure his wounded opponent got medical treatment.

The Germans did not reciprocate, however, machine-gunning several parachuting Poles.

On the first day alone, the Polish air force claimed 25 aircraft shot down for the loss of 10 of its own. The next day, the P.11s of the Pomeranian detachments pounced on a squadron of 16 Do-17s and destroyed nine for no loss.

Meanwhile, the P.23s and P.37s of the Polish air force concentrated on hammering the columns of German Panzer tanks that had pierced the Polish army’s defenses and were rapidly overrunning the country. Flying at low altitudes, the bombers suffered heavy losses from German fighters and anti-aircraft guns — and even flak from Polish troops, who assumed all overhead aircraft were German.

Several sources suggest that Polish bombers accounted for the majority of the 600 German tanks Warsaw’s forces knocked out in the campaign. What is certain is that the XVI Panzer Corp’s advance stalled for two days at Radomsko while under attack by P.23s, and at Czestochowa the 4th Panzer Division was pounded repeatedly by P.37s, losing 28 percent of its strength, by its own account.

In response, the German army begged the Luftwaffe to provide more air cover.

In the first six days of battle, the Polish air force shot down 105 aircraft for the loss of 79 and dropped 200,000 pounds of bombs. But as German tank columns advanced deeply into Poland, Polish units had no choice but to evacuate one base after another.

Soon they were suffering major shortages in fuel and spare parts, to the point that they could only send small numbers of aircraft into the air at a time.

The greater concentrations of grounded Polish aircraft — with fewer available to defend the skies — made German airfield attacks more effective. On Sept. 13 Bf.109s discovered another secret airfield at Hutniki. The Germans shot down four P.23s and strafed several P.37s on the ground.

On Sept. 10, Gen. Tadeusz Kutrzeba led the Poznan Army in a major counterattack at the Bzura river that sent the Germans reeling. Hundreds of Luftwaffe bombers came to the rescue of the retreating Wehrmacht. Polish P.23s and P.37s flew in support of the ground attack, while the Poznan Army’s own fighters provided air cover, shooting down 32 aircraft over the course of the campaign.

But the Luftwaffe’s massive intervention reversed the tide of battle.

Still, the Poles were planning to mount a rearguard defense on the Romanian border while they awaited a shipment of modern fighters from England and France. But on Sept. 17, the Polish air force scored its last two victories of the war — a Do-17 and Soviet fighter. The Soviet Union had just formed a pact with the Nazis and invaded Poland from the east in order to secure its share of the spoils.