Not Your Father's Cold War: How the Struggle With China Will Be Very Different 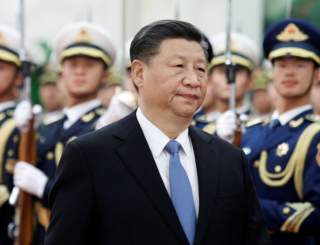 Key point: Beijing and Washington seem to be set on a path of confrontation that will only be heightened by social media and new technologies. The question is who can out compete who?

The United States and China are locked in a rivalry over trade, technology, military control of the South and East China seas, and increasingly over ideology and human rights. The two countries have been in a cyberwar for years already, featuring Chinese attacks on the Pentagon’s personnel system and the U. S. Navy’s ship maintenance records. There is a military build-up on both sides in the direction of great power conflict. Yet, neither side sees it remotely in its self-interest to initiate a violent clash. In short, this is a cold war, but vastly different from the cold war between the United States and the Soviet Union.

China’s cultural genius and geographical capacity surpass that of the Soviet Union. Whereas the northern coastline of the Soviet Union was ice-blocked for much of the year, and historic Russia has been a frigid and insecure land power with few natural frontiers, infusing an all-encompassing and debilitating “cynicism” into its national spirit, as Joseph Conrad observed, China, with a shoreline in the temperate zone extending 9,000 miles along one of the world’s major shipping lanes, constitutes a mineral-rich continent, able to be both a land and sea power. Moreover, China’s 3,500-year-old succession of dynasties, of which Mao Zedong’s is only the most recent, has bequeathed it with a legacy of institutional order and self-confidence appreciably greater than Russia’s. Russia produces few exportable consumer goods, even as China’s fifth-generation mobile network, led by Huawei Technologies, constitutes stiff competition for our own, with a revenue of $122 billion in 2019. There is, too, China’s key role in supply chains for the world’s most desired electronic products; famously the Apple iPhone. There is not the old Soviet Union that could produce hydrogen bombs and little else.

Whereas the original Cold War was principally about gaining an advantage in the game of nuclear annihilation, this cold war will be principally about cyber and computer dominance, ranging from a plethora of consumer products to naval warfare, since naval engagements of the future will be about which side’s intelligent battle system can incapacitate the other’s first. The first Cold War was about bigness: tank battalions and nuclear warheads. This second one will be about microscopic smallness: silicon chips and electronic circuitry.

While the original cold war signaled the apex of the Industrial Age, the U. S.-China cold war heralds the second phase of post-industrial globalization. The globalization which lasted for three decades following the fall of the Berlin Wall had the effect of unifying the globe and creating new middle classes through free trade and the exchange of ideas - from management practices to scientific knowledge. This second phase, more friendly to pessimists, will be about dividing the globe into different political, trade, consumer, and technological domains. After all, globalization was never a conflict-free security order, as originally advertised, but merely a value-neutral, temporary stage of economic development.

In the original Cold War, President Richard Nixon and National Security Advisor Henry Kissinger moved closer to Communist China in order to balance against the Soviet Union. This time there is less hope of moving closer to Russia to balance against China, since China and Russia are now allying, rather than on the brink of military conflict with each other as in 1969, two years before Kissinger’s secret trip to Beijing.

But not everything is different than during the first cold war and not everything is harder. Some things are eternal. Diplomacy remains paramount and human rights remain a critical, underappreciated tool of leverage.

Indeed, the original Cold War featured summit meetings, nuclear weapons treaties, hotlines, and the Helsinki human rights process. Precisely because the United States and the Soviet Union could not agree on the question of which side history itself was on, they decided to draw rules and boundaries around their struggle, to keep it from literally going nuclear. However, President Donald Trump has thus far eschewed traditional diplomacy with China in favor of a narrow dialogue over trade. Because Trump has obsessively reduced the U. S.-China cold war to one contentious topic, he has exchanged general confidence building across a range of issues for a zero-sum stare-down on just one issue, thus undermining progress on the South China Sea, the oppression of the Muslim Uighur Turks in western China, and so forth.

The plight of millions of Muslims in Xinjiang Province is instructive. The U. S. Congress is uniting across partisan lines to condemn the Chinese regime’s treatment of this minority. But while a laudable action, it may also be a sterile one, since it will only encourage Beijing to dig in its heels. Given an on-again, off-again trade war coupled with the absence thus far of a general, continuous dialogue between the two adversaries, Congress’s action will appear to President Xi Jinping as just another American assault on China’s legitimacy. After all, while the Muslims in western China represent a human rights issue to us, to the Chinese they represent a strategic issue: because for centuries western China was the weakest and most unstable part of China’s internal empire, and stabilizing it along with China’s other border regions is what gives China the luxury, rare in its history, to concentrate on sea power. Thus, China’s brutal clampdown in Xinjiang and its aggressive naval expansion in the South China Sea and the Indian Ocean are integrally linked.

The benefit of a wide-ranging and confidence-building dialogue with China, of the kind pursued by Washington throughout the middle and latter parts of the Cold War with both Beijing and Moscow, is that a human rights issue like the treatment of the Uigurs can be brought up and discussed, with the possibility of some improvement in the situation that will not be seen as a concession by the Chinese, and not trumpeted as such by us.

Moreover, absent such a sustained, wide-ranging dialogue with Beijing – which to its credit, the Trump Administration is now poised to establish - our posture toward China will gradually assume a purely military aura. This could alienate liberal elites which largely bought into the original Cold War. But an emphasis on human rights and personal freedoms – given  China’s high-tech Orwellian system - will rescue us from this fate. It will also provide an edge in a struggle that will be more difficult than the one against the Soviets - since as technology dominates the new cold war, and, as supply chains decouple, China’s ability to satisfy global consumers will likely be equal to ours.

This second cold war, conducted on a teeming planet whose anxiety is intensified by the passions and rages of social media, is only in its beginning stages. The aim, like in the first Cold War, is negative victory: not defeating the Chinese, but waiting them out, just as we waited the Soviets out: because at some point, as its middle class matures and continues to expand, mainland China may face its own equivalent of the internal upheavals that have roiled Hong Kong, Latin America, and the Middle East.

There are fundamental differences between the two cold wars. But in order to prevail we must concentrate on the similarities: the need for open-ended dialogue and focusing on our strong suit - liberal values in the face of increasingly intrusive technologies. For this cold war could end with echoes of 1989: with one side’s domestic order proving more resilient than the other’s.

Robert D. Kaplan is a managing director for global macro at Eurasia Group. His most recent book is The Return of Marco Polo’s World: War, Strategy, and American Interests in the Twenty-first Century. This first appeared earlier in January 2020.