Note to Joe Biden: Mexico Is Becoming an Unstable Mess 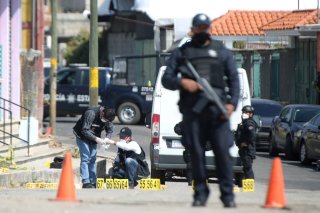 Ahead of what some are calling “the most violent elections in Mexico’s history,” the killing of Alma Barragán in Moroleón this week brings to thirty-four the number of slain political candidates just this year at the hands of drug gangs. Barragan, a sixty-one-year-old political novice, apparently made the mistake of sharing her location during a Facebook live stream. The gangs, seeking to place their sympathizers in office and intimidate voters, were quick to capitalize.

Most Americans remain unaware, but the full scope of Mexico’s current electoral violence is staggering. Since election season began in 2020, a total of eighty-eight politicians have been murdered ahead of June 6 elections that will determine who controls fifteen governor seats, the lower house of Congress, and thousands of other positions nationwide.

Unfortunately, throughout this escalating instability, the attention of the Biden administration’s foreign policy team has repeatedly been diverted by a series of potential crises abroad: first by Russian mobilization on Ukraine’s eastern border, then by concerns about China’s aspirations and Taiwan, and most recently by the wave of fighting in the Gaza Strip. By contrast, the Biden administration’s public statements on Mexico have largely been largely confined to a public relations and damage control effort following a wave of migration across the southern border that is currently at a twenty-year high.

While conflicts in the Middle East and Asia will continue to grab headlines, it may turn out that America’s most immediate foreign policy challenge lies much closer to home. After all, only Mexico shares a 2,000-mile land border with the United States, and with a population of 127 million citizens, it is larger than Ukraine, Taiwan, and Israel combined.

Given its sheer scale and intimate economic linkages with the American economy, it is entirely possible that instability in Mexico could spill across the southern border. Moreover, even if the violence is somehow quarantined, an increasingly volatile political situation south of the border will drain Washington’s attention and resources, limiting its ability to concentrate on intensifying great power competition with Russia and China. Indeed, foreign rivals are likely well aware of this strategic vulnerability.

In this context, the responsibility of the Biden administration is threefold. First, there is a basic responsibility to inform the American people about the true scope of the challenges Mexico faces and its implications for the United States. Second, it is imperative that the administration make a more concerted effort to control the current migration surge, a self-induced crisis that only makes an already dangerous situation even more complicated and increases the odds of spillover violence. Finally, although Mexico has been a conspicuous absence in recent statements of Department of Defense priorities, it is becoming ever more clear that this challenge arguably represents an immediate danger to the United States in ways that recent violence in Ukraine and Gaza does not. It, therefore, needs to receive elevated priority and more attention as a security threat.

Christopher M. England is visiting assistant professor of political economy at the College of Idaho. His foreign policy writing has been published by The National Interest, The American Conservative, The Atlantic Council, and RealClearDefense. Contact him at [email protected]