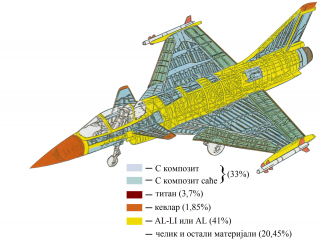 In the 1980s, the Socialist Federal Republic of Yugoslavia (SFRY) was in the need of a new light fighter aircraft to replace their aging fleet of MiG-21s. They began a domestic project under the name “Novi Avion”—literally “New Plane” to develop an indigenous light multirole fighter jet.

While the Yugoslavian aerospace industry was not new to designing jet combat aircraft, having built the J-22 “Orao” attack jet and G-4 “Super Galeb” trainer/light attack jet before, it was new to building supersonic jet fighters. To remedy this, the SFRY requested technical assistance from various foreign aviation companies, including Israeli, French and British firms.

In the end, the French Dassault Aviation firm was selected to provide technological assistance to the Novi Avion project.

As such, the Novi Avion project drew significant design influence from Dassault’s new Rafale fighter that it was developing for the French Air Force.

One key technology integrated into the Novi Avion that was a first for a Yugoslavian design was the use of fly-by-wire (FBW) technology. This was combined with an aerodynamically unstable aircraft to make the Novi Avion more maneuverable.

This philosophy of using FBW to stabilize an unstable airframe is used by almost all of Novi Avion’s major power contemporaries, including the American F-16, Soviet Su-27, and French Mirage 2000 (also made by Dassault). In order to fully develop their grasp on FBW technology, one J-22 “Orao” was converted into a FBW aircraft.

The airframe itself was also very modern. The majority of the wing was to be built of a carbon-fiber composite, with key structural elements being built with titanium, steel and aluminum alloys. As this material technology was already developed for the Rafale, significant development time and risk were saved by using Dassault’s composite technology on the Novi Avion.

Similar levels of collaboration occurred on the Novi Avion’s avionics. The mission computer was designed so that the pilot could rapidly change the current tasking and possibly reprogram the mission during flight. Navigation was accomplished with an INS/GPS system, and a limited voice-control system was implemented.

The databuses for the avionics were done in the NATO standard MIL-STD-1553 to allow for easier upgrades and compatibility with other Western radars and devices.

The air-to-air weapons fit was also taken directly from the Rafale. A thirty millimeter GIAT cannon would installed internally. French missiles would cover everything from the short range (Magic II SRAAM) to mid and long ranges (Super Matra and MICA). Given the MICA’s active-radar homing operation, the Novi Avion would have been a dangerous opponent in air-to-air combat.

The air-to-ground fit was rather typical for a multirole, with the Novi Avion being able to fit a variety of guided and unguided bombs and missiles. It would likely be compatible with the AGM-65 Maverick, which Yugoslavia acquired as well as the Grom, their own version of it. Some discussions were had with France about acquiring the MBDA Apache cruise missile as well, but not much came of it.

Likewise, the powerplant was also very French. The Novi Avion was powered by a single Snecma M88Y, which allowed it to attain speeds of up to Mach 1.88. While this is slower than some dedicated air superiority fighters like the F-15 or Su-27, it was considered good for a light fighter.

Progress on the Novi Avion design never went past a few cockpit mockups, some wind tunnel scale models. Completion of the first prototype was slated for 1995, with serial production occurring from 1996 to 2009.

Despite its significant promise as a powerful indigenous light fighter, the program was halted by the breakup of Yugoslavia. The interim MiG-29 fighters (which were acquired in the mid-1980s as an urgent replacement) served the Yugoslav Air Force during the conflict and continue to serve in the Serbian Air Force today.

As Serbia is in the process of acquiring additional MiG-29s, it’s fair to say that the Novi Avion project is quite dead.

Despite its failure, Novi Avion is important as it represents just how well Yugoslavia played both sides during the Cold War. During the interim fighter trials that resulted in the procurement of the MiG-29, the MiG-29 flew off against the Mirage 2000 and won. Despite that, cooperation with Dassault continued on the Novi Avion project, and many advanced technologies originally developed for the Rafale were integrated into the design.