Now Is the Time to Voice Our Concerns About the Impacts of U.S. Policy in Haiti 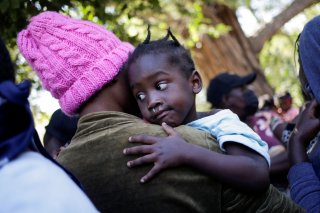 If there’s one thing President Joe Biden’s mistreatment of the Haitian people demonstrates, it’s that he learned nothing from his failures in Afghanistan.

In Afghanistan, Biden failed to prepare for a migration crisis despite warnings that Afghan National Security Forces were unable to protect American allies. In Haiti, where American allies have long-lived unprotected, it’s a similar story.

You’d think that an influx of Haitian migration would be easy to predict after U.S.-trained ex-Columbian soldiers allegedly assassinated Haiti’s president in July, and an August earthquake destroyed more than 50,000 homes. But Biden again failed to prepare, and Haitian refugees were met at the U.S. border by horsemen sent to drive them back.

Even before Haiti’s multiple crises began, Biden left the United States unprepared by rejecting Border Patrol’s request for additional resources. Further setting the stage for a border crisis, Biden decided in August to extend the Centers for Disease Control and Prevention’s (CDC) Title 42, the Trump-era policy of immediately expelling migrants at the border.

Early last week, the Biden administration stood by former President Donald Trump’s policy, boasting, “The majority of migrants continue to be expelled under the CDC’s Title 42 authority.” Ultimately, however, perhaps due to enormous public pressure, Biden declined to broadly apply Title 42 and instead allowed the majority of Haitian refugees into the United States for asylum proceedings.

While a step in the right direction, it’s far from the end of the story for the Haitian migrants. Only a fraction of the migrants are likely to obtain legal permission to reside in the United States as less than twenty-seven percent of all asylum applications were approved in 2020.

Rather than focusing on taking care of refugees through the asylum process, Biden now promises he’ll make border patrol agents pay for their contributions to the recent border crisis. The president is prepared to pin this disaster on a few working-class men he ordered into a difficult situation, but don’t worry, he also assures us that he’s taking responsibility.

Biden does deserve praise for ultimately granting asylum hearings to most of the Haitian migrants. Further, he reestablished protected status for Haitian immigrants in the United States to ensure that Haitians already living in the country won’t be deported.

These legal protections are critically important to all Haitians, even those who remain in Haiti, as nearly one-third of the Haitian economy comes from international wire transfers called remittances. The United States is the largest source of remittances to Haiti, so every Haitian migrant allowed into the United States benefits their homeland.

In total though, Biden’s Haiti policy lays bare the confusion and contradiction inherent in his presidency. Biden claims to reject a Trumpian presidency that puts the president’s ego ahead of human rights while he does just the same.

In Afghanistan, Biden blindly followed Trump’s withdrawal plan just as he blindly reapproved Trump’s Title 42 border policy. Then, when a predictable humanitarian crisis follows, “Joe Biden the Humanitarian” appears to save the day.

Those of us who have long battled for the Haitian people and their causes see through this act of political theatre. As Haitian Prime Minister Ariel Henry warns, the United States should expect an unrelenting flow of Haitian migrants until Haiti changes internally.

“Biden the Humanitarian,” though, has already proven that he lacks the courage and political capital necessary to break from the Trumpian policies he was elected to replace. It’s therefore foolish to expect that Biden will fundamentally alter the decades-old foundations of American law that impoverish Haiti.

Among these foundations of U.S. economic policy is the Farm Bill, which subsidizes American farmers at an unrealistic level, so much so that Haitians cannot compete with their American counterparts. Similarly, American trade policy extracts tax dollars from Haitian businesses and from the few American businesses that are dedicated enough to succeed in Haiti.

Biden must eliminate these tariffs and domestic subsidies to support change in Haiti, but domestic subsidies and tariffs satisfy the American people’s desire for policies that benefit American businesses, even if they come at the expense of free and fair markets. As such, the United States likely won’t see these fundamental policy changes for decades, if ever.

Meanwhile, American domestic and foreign policy will continue perpetuating foreign poverty. Migrants from impoverished nations will continue seeking refuge in the United States, and this predictable cycle will continue to stymie American presidents who are incapable of diagnosing the problems they are elected to solve.

However confused Biden’s foreign policy seems, it’s clear from his decision not to apply Title 42 to the Haitian migrants that he’s willing to listen to the demands of the American people. Advocates of Haitian causes would be wise to use this to their advantage. Now is the time to voice concerns about the impacts of U.S. policy in Haiti. The president may be a slow learner, but so long as he has an open mind, there’s hope for our Haitian neighbors.

Samuel Teixeira was born in New London, Connecticut, and graduated from the University of Virginia in 2015 with a BA in Government. He is a Contributor with Young Voices.