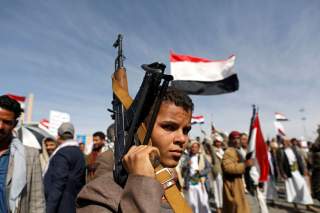 The first such improvisations were deployed in combat in February 2017, and by June the Houthi-dominated coalition claimed the downing of five fighter-bombers, one helicopter and one UAV. Whether any of the missiles actually scored a hit remains unclear.

Released by the Houthi-controlled media on Jan. 7, 2018 the video in this post shows one of their R-27T air-to-air missiles deployed as a surface-to-air missile (SAM) near missing a Royal Saudi Air Force F-15SA from No. 55 Squadron.

By January 2018, Houthis were greatly weakened and under immense pressure because of the air strikes launched by Saudi-led coalition. They reacted by intensifying their propaganda warfare: they launched a campaign of reporting almost every single air strike by the coalition as causing civilian losses. Simultaneously, the Missile Research and Development Centre and the Missile Force intensified efforts to bolster their air defence capabilities. One of the solutions was to take air-to-air missiles from stocks of the former Yemeni Air Force and attempt deploying them for air-defence purposes. As explained by Tom Cooper in his book Hot Skies Over Yemen Volume 2: Aerial Warfare Over Southern Arabian Peninsula, 1994-2007, the idea was nothing new: back in 1999, the Serbs adapted Russian-made R-60 (AA-8 Aphid) and R-73 (AA-11 Archer) air-to-air missiles for surface-to-air operations. Yemen acquired a stock of the same missiles back in the 1980s and 1990s, and an even larger number of R-27 (AA-10 Alamo), and R-77 (AA-11 Adder) when buying MiG-29SMs in the 2000s. The challenge was adapting such weapons for deployment from the ground, though without the support of the fire-control systems of the aircraft that are usually carrying them. The latter issue took radar-homing missiles — like R-77 and R-27R — out of the solution: their deployment would require the adaptation of at least one of the N019MP radars and related fire-control systems from MiG-29SMs. Not only was this a complex undertaking, but most of the necessary systems were destroyed early during the war.

Instead, engineers of the Missile Research and Development Centre opted to adapt infra-red homing missiles as SAMs. That effort required the adaptation of APU-60 and P-12 launch rails — for the R-60s and R-73s, respectively — on supports mounted on pick-up trucks, together with a reliable supply of electric power and liquid nitrogen to cool their seeker heads.

The first such improvisations were deployed in combat in February 2017, and by June the Houthi-dominated coalition claimed the downing of five fighter-bombers, one helicopter and one UAV. Whether any of the missiles actually scored a hit remains unclear. The reality is that air-to-air missiles are designed to be fired from fast-moving aircraft that are already airborne: thus, their motors are relatively small and light in comparison to the big, heavy, and far more powerful motors of surface-to-air missiles, designed to hurl the missile from the ground and zero speed high into the air. Without such motors, the effective range of air-to-air missiles fired from the ground is dramatically shorter than if they are fired from the air. At least as important is the issue of fire-control: pointing a guided missile in the direction of its target and firing proved insufficient. R-60s and R-73s function better if locked-on at their target before launch. Engineers of the Missile Research and Development Centre found a solution by coupling one of three US-made FLIR Systems ULTRA 8500 turrets — delivered to Yemen back in 2008 — with makeshift controls for their ‘new’ SAMs. One of these enabled them to fire a R-27T missile that narrowly missed a brand-new Boeing F-15SA from No. 55 Squadron, RSAF, underway over Sana’a, on Jan. 7, 2018. Ironically, while the first related reports only cited the firing of the missile, the Houthi-controlled media in Yemen, and all Iranian media outlets were quick to ‘convert’ that report into a claim that the targeted F-15 was shot down.

Something similar happened in the case of a Tornado IDS of the RSAF that came down over the northern Sa’ada province on the same day. The aircraft suffered a failure of its oxygen system: this caused a fire inside the cockpit, forcing the crew to eject. Although coming down in an area firmly under Houthi control, both crewmembers were quickly recovered in a combat search and rescue operation run by three SA.532 Cougar helicopters from No. 99 Squadron, supported by eight F-15s and three AH-64s. Nevertheless, the Houthi and Iranian media promptly associated this loss to the deployment of ‘new SAMs’. Actually, the missile fired at the F-15SA over Sana’a on Jan. 7, 2018 — was the first ever to get as close to its target.