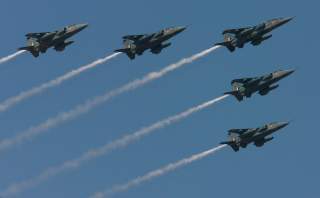 HAL has built 120 Jaguar strike aircraft under technology transfer from BAE Systems of the United Kingdom.

India is in talks to buy 31 ex-French Air Force Jaguar attack aircraft and the Indian Air Force chief, ACM Birender Singh Dhanoa, has been discussed the issue with his French counterpart during his visit to the country this week.

As reported by Defense News in fact, the French government made the offer of sale for the Jaguar fighters about six months ago, and India is actively pursuing the opportunity.

The news has also been confirmed by a top Indian Ministry of Defence official who refused to comment on the price offered by France for the Jaguars, but did say India is actively considering acquiring them after proper refurbishment.

Meanwhile, India’s state-owned Hindustan Aeronautics Limited (HAL) is undertaking the modernization process of Jaguar DARIN III twin-seat aircraft. So far, three upgraded Jaguar DARIN III prototypes have been developed and about 60 Jaguar aircraft will be modernized in three years’ time, which will give operational life to the aircraft for another 20 years.

HAL has built 120 Jaguar strike aircraft under technology transfer from BAE Systems of the United Kingdom.

Moreover, according to Defense News, during his visit to France Dhanoa also visited the Rafale production line and flown in one of the aircraft.

The two countries signed a €7.8 billion (U.S. $8.9 billion) intergovernmental agreement on Sept. 23, 2016, under which 36 Rafale fighter jets in fly-away condition will be procured from Dassault Aviation for the Indian Air Force.

India will receive the first six Rafale aircraft in September 2019, and delivery of all 36 fighter bombers will be completed by the end of 2022. Dassault Aviation will also make specific modifications to the aircraft in order to satisfy India’s requirements. Furthermore Indian Air Force Rafales will carry Meteor and SCALP missiles.