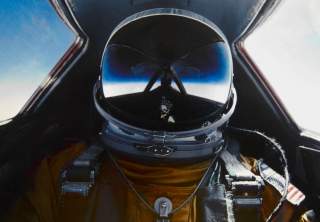 The seller includes in the shipment the original helmet bag.

Furthermore the seller has included “a rare t-shirt and two patches that come from Edwards Air Force Base in California from the time the original pilot owned all this.”

According to the auction:

“It is very hard to find an original helmet that was used on the SR-71 Blackbird for sale. In fact, I believe its been over a decade since one like this has been in the market. You will mostly find this type of equipment on display at museums, like at the Hill Aerospace Museum in Utah. I was able to purchase this a long time ago from an old neighbour whose father was the actual pilot that this belonged to. This has been sitting around collecting dust for many years, so it is time to let it go. I know that these cost above $16,000.00 each, to produce in the 1970’s.

“Like the suit itself, the helmet used in this configuration was made up of different parts. The outer shell was made of fiberglass and shaped more like an oval than a circle, although the difference was barely distinguishable. This outer shell was integrated with a metal ring that locked into the neck ring of the suit using “dogs”, or a series of over 80 separate spring-loaded latches that locked into place once the helmet was fully seated into the neck ring. There was no stop point on the rotation of the helmet, so theoretically speaking; it could spin freely 360 degrees clockwise or counter clockwise.

“There were two different and very distinct sections of the helmet. The primary section was the front where the flier’s face was, which was sealed tight from the back portion of the helmet by a snug neoprene face seal. There was a large opening in the front of the helmet’s shell that allowed an unrestricted view for the flier. All around the opening was a small gray rubber strip that had over 100 little holes in it, each hole being the size of the head of a pin. This is where the oxygen flowed into the face cavity. Instead of blowing directly into the face, it flowed across the “clear” face shield, partly to keep from going directly into the wearer’s eyes, but also to assist in the defogging of the face shield from the warm, humid breath of the ACMs. The word “clear” is in quotes because the face shield really wasn’t. In reality, they either had a minute layer of gold over the glass, or there were numerous wires that ran horizontally all the way across and made up the final part of the face heat system for the helmet. To tell which was which, all one had to do was to hold the visor up to the light and look through. If a series of hairline squiggles spaced about 1/16” apart didn’t run across the front of the face shield, then the faintest golden hue could be noticed. Gold was used for the face heat system because of its ability to conduct heat at a low temperature. The visors needed to be warm enough to defrost and keep them from fogging up while at the same time not make the ACM sweat.

“The face shield had a small electrical wire that ran over to the communications port and was integrated with the communications system for the helmet from the inside. The outer/second visor on the helmet was the sunshield, and it was a dark green. This was nothing more than one great big sunglass lens, almost as dark as the shade on a welder’s mask.

“While the sun visor was a simple visor raised and lowered by hand and could be left at any position between full open or full closed, the face shield was another matter. The face shield was connected to a locking mechanism called the Bailer bar. The face shield could be either full open or full closed, but to lock and secure it, the Bailer bar had to be brought all the way down and secured to a small latch directly in the middle and just below the face opening in a hook-like fashion and a safety lock fully engaged by pushing another lever all the way down. One knew both were properly engaged when they either heard or felt both of these mechanisms “snap” into place and the visor could not be opened when the Baylor bar tugged upon. At the pivot point of the Bailer bar was a small white Teflon pin on the helmet’s left side that was relaxed in the visor’s open position and depressed when the bar was down and locked. This was crucial because that single pin was what either engaged or disengaged the oxygen regulators and either started or stopped the flow of oxygen to the face cavity.

“NOTE: This is where the SR’s S1030 and the U-2/TR-1‘s S1031 helmets differed. Where the S1030 had the on/off capability, the S1031 had a continuous flow regardless of face shield position. This was in response to the difference in aircraft performance. Regardless of aircraft, the ACMs had to pre-breathe 100% oxygen for at least ½ hour prior to reaching their mission’s altitude. The SR-71 had to meet up and top off its tanks from a refueling tanker prior to ascending. This took the better part of 30 minutes, so they didn’t have to lock their visors down until just prior to the safety pins being pulled from their egress systems.

“The U-2 was a different animal, though. It did not refuel therefore it climbed straight away. This difference was even more obvious to those who were privileged enough to watch the launches, and witness her literally stand on her tail before she got 2/3 of the way down the runway. This meant that the pilot went on oxygen right when the pre-flight tests were begun and a continuous flow of oxygen was required.

“On the left side of the helmet just below the face opening was a round knob used to adjust the helmet’s microphone, once the visor was closed. Keep in mind that once the visor was closed, the fliers began “pre-breathe” (purging of nitrogen from their system), and they were not allowed to open up again until their descent below 10’000 ft. at the end of their mission without having to start the pre-breathe period all over again. If that visor was accidentally popped and oxygen integrity compromised, it was back to the very beginning.

“‘On the right side of the helmet and about 1 ½’ of center was the feeding port. This was an opening with a spring-loaded flap about the size of a large straw that the pilots could stick the tubes in order for them to drink, or eat “tube food”, without introducing a leak. Tube food was food which was food in a paste form and packed into an aluminum tube the same shape and size as a standard tube of toothpaste. Fliers had their choice of beef and gravy, butterscotch pudding, applesauce and peaches, to name a few. If for some reason the spring mechanism were to fail, there was a small round rubber stopper in the sleeve pocket that they could press into the feeding port to prevent loss of pressure from their helmet. Behind the feeding port were two small test ports in the helmet. One led to the face cavity and the other into the suit portion of the suit, intended solely for taking the required pressure and flow testing measurements. When in storage, the male probes used for testing were replaced by screw plugs that were secured tightly into the holes.

“Back on the left outside part of the helmet shell was what looked like a black disc about two inches aft of the microphone adjustment. This was the cover to the anti-suffocation device, or ‘anti-suff valve’, and this device was the only way that ambient (outside) air was to be introduced into the suit as a survival measure. A thin, Teflon wafer about 1 ¼” inch in diameter and held against the opening in the helmet, this device was designed so that if the flier lost their oxygen supply such as in the case of egress, then if they were to inhale hard enough, the spring would compress and allow air into the face cavity. The driving scenario behind this was water survival where a flier had to keep their face shield closed and locked to avoid water getting in and filling their suits, which would ultimately result in dragging them down to the bottom and drowning them. With the visor closed and the anti-suffocation cover designed in the manner that it was, while some water was certain to get in, it would be a miniscule amount, greatly reducing the risk. Resistance for the anti-suff was set so that even if unconscious, air could be drawn in to avoid suffocating the flier. Further back on the left, just behind and below the left ear was the communications port that the internal communications and face heat wiring ran out of to connect to the aircraft’s systems.