Is Nuclear Secrecy Worth the Costs? 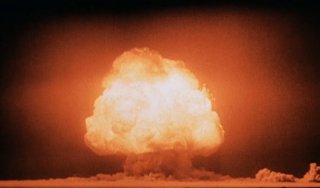 The scientific discovery of nuclear fission just before World War II led some to fear the worst: Adolf Hitler with a nuclear weapon. The fear that the science behind nuclear weapons could cause catastrophe, and therefore needed to be kept secret, caused tensions within the scientific community. Historian and Professor Alex Wellerstein addresses the controversies around the need for secrecy of the atomic bomb in his new book Restricted Data: The History of Nuclear Secrecy in the United States.

At the onset, the tension within the scientific community rested on the idea that “if you start imposing secrecy you’re essentially going to gut the scientific process and corrupt it, on the other hand, [scientists were] desperately afraid of the consequences of this information circulating,” Wellerstein explains on the latest episode of the Press the Button podcast. With the creation of the Manhattan Project in the United States, the bomb project was deemed to be so important that it was hidden from congressional oversight, reversing a core principle of the U.S. Constitution. At the time, President Franklin Roosevelt did not even tell his vice president, Harry Truman.

“Ironically, [Soviet leader] Stalin knew about the bomb project before Truman did because of the spies,” Wellerstein notes. However, Soviet spies within the Manhattan Project were not, according to Wellerstein, a threat to the survival of the project—they did not have an interest in interfering. The biggest fear for the project administrators was to lose funding. Wellerstein explains, “Congress could have shut the whole thing down, and so in a way, they were a bigger threat to the ultimate goal of making and using a bomb within a very short time period than the Germans or the Japanese or the Soviets.” The Germans and the Japanese, as he notes in his book, did not think the making of a bomb would be feasible under the context of a world war and were, therefore, not looking for it. Of course, once the bomb was used in 1945, the secret was out.

This history, unfortunately, has set a precedent of secrecy around conversations in both the public and political spheres on the creation and use of the most dangerous weapon of our time. After WWII, the seemingly existential threat of nuclear weapons in the hands of the Nazis turned into a fear that such weapons could be held by China, then North Korea, and now Iran. As Wellerstein describes on the podcast, this quickly developed into a pattern of “using the justification of these threats to do things that are really not consistent with our core values as a country.”

Within the nuclear space, this precedent of secrecy has led to a lack of public debate on issues such as presidential sole authority and first-use, key policies that both the public and Congress should discuss. Instead, Wellerstein explains, nuclear discussions make people feel like they are “straying into a dangerous zone.” The problem, he says, is that “we don’t feel like we are straying into a dangerous zone when we talk about a lot of other things that are important to us and nukes ought to be important to us and… a democratic civil society ought to talk about this…we live in the United States, this is your tax dollars at work.”

When asked if secrecy works as a nonproliferation tool, Wellerstein points out that “it’s not clear that secrecy does much more than slow things down a little bit and it’s not clear that it’s that effective at doing that. A better [nonproliferation] approach is something that does not rely on trying to keep information locked up or to keep people ignorant, [but] is something that allows you to really put constraints [on the development of nuclear weapons].”

Today, it is too easy for politicians and officials to punt questions around nuclear policy by telling the public that the topic is too sensitive, or that information must remain classified. But the core questions of whether or not we should have nuclear weapons, and who should be in control of their use, deserve a robust, open debate. As Wellerstein concludes, the danger of nuclear secrecy is that it has led to a “group think bubble” on an issue that should be part of our national conversation.

The entire interview with Alex Wallerstein is available here on Press the Button. To purchase the book follow this link.