Nuclear Terrorism Remains a Threat That America Should Remain Vigilant Against 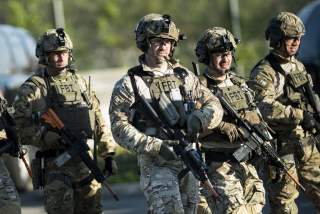 Key point: The threat of nuclear terrorism hasn't gone away.

Just in time for the annual appearance of cherry blossoms, fifty-two heads of state will come to Washington to discuss nuclear security. The fourth and final Nuclear Security Summit, launched by President Barack Obama in 2010, will take stock of the progress made in securing vulnerable nuclear material over the last six years.

Thanks to the summit process, nuclear security, which was previously relegated to small groups of mainly Western bureaucrats and nuclear nerds, has become a prominent issue on the international stage. Major media outlets cover it, governments around the world have been forced to learn about it and greater understanding exists of why protecting nuclear material is critical to international security.

Despite the buzz that these regular meetings of heads of states have generated, many states around the world and their citizens still do not consider nuclear security a relevant concern. The message the Nuclear Security Summit is promoting—that nuclear or high-risk radiological material might end up in the wrong hands and used in a bomb—just doesn’t resonate.

Why is this so?

Semantics matters, and how we talk about the risks of nuclear terrorism contributes to these perceptions. The discourse on nuclear security focuses disproportionately on the West. For example, whenever those who care about nuclear security make their argument, they usually say something like: “Imagine a nuclear bomb detonating in Manhattan, London or Paris…” Common threat scenarios involve Western targets, and therefore make the problem seem like a Western one.

Further, divergent views on nuclear security are undergirded by tensions in the broader nuclear realm. Many countries without nuclear weapons or military nuclear materials are reluctant to embrace the idea that the nuclear security regime needs strengthening. States with nuclear weapons have prevented the Nuclear Security Summit from addressing the security of nuclear material in military stockpiles, which constitutes more than 80 percent of all global stockpiles of fissile material.

Given this, why should all states bear the burden of investing in nuclear nonproliferation and nuclear security, when nuclear weapons states fail to make progress toward disarmament and are reluctant to talk about the security of military nuclear materials? This just further contributes to the unfairness of the existing global nuclear order, these countries argue, in which a few states benefit from having nuclear weapons while others try to protect their right to peaceful nuclear energy.

However valid these arguments may be, there is an inescapable truth about nuclear terrorism. Though a terrorist attack using nuclear or radiological material may be a low-probability threat, it would have dramatic effects on the global commons. The consequences would extend to every country on Earth, not just the one on whose territory the event took place.

A nuclear terrorist event would be a global event because we live in a world of unprecedented interconnectedness. Let’s consider three possible immediate global effects.

The first is the disruption of supply chains. Companies and production lines throughout the world rely on an extended international network of suppliers and transnational shipping routes. Ordering “just enough” and “just in time” means that a short interruption in supply or shipping in one country would send shock waves to many other countries around the world. The RAND Corporation once studied a simulated nuclear attack in the port of Long Beach. They concluded that it is very likely that all U.S. ports would shut down for extended periods with severe repercussions for global trade.

The second is chaos in the global financial markets. Should a nuclear event happen in a major financial hub and obliterate foreign exchange institutions, all major banks worldwide would be instantaneously affected. The average daily volume of foreign-exchange market turnover is close to $5 trillion.

The third is the effect on individual industries. As a former U.S. customs and border official once warned, if a sea container is used to transport a nuclear device that was later detonated, one can be sure that shipping of sea containers would cease, costing countries billions of dollars. Not to mention that the global nuclear industry would take a direct hit, much worse than after Fukushima.

There are enough reminders of how comparatively smaller events have disrupted our interconnected world. The events following the 9/11 attacks slowed world economic growth from 4.1 percent in 2000 to 1.4 percent in 2001, and dramatically affected the international travel industry—recall the introduction of metal cockpit doors, new security screening procedures and longer waits at the airport. The eruption of an Icelandic volcano in 2010 reverberated across worldwide travel patterns; the unprecedented air traffic shutdown caused a total loss of $1.7 billion to the airline industry and affected ten million travelers. More than one hundred thousand flights were cancelled over eight days, the equivalent of almost half of all global air traffic. This was all caused a volcano in a small European country, not a nuclear device exploding at a major airport hub.

No matter when and where a nuclear incident occurs, we would all be affected.

Togzhan Kassenova is an associate in the Nuclear Policy Program at the Carnegie Endowment. This first appeared in March 2016.