Nuclear War? How Kashmir Could Still Cause an Indo-Pakistan War in 2020 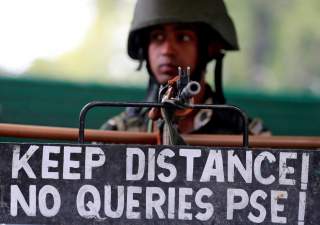 The Kashmir question will make the already-dim prospects for a de-escalation in tensions between India and Pakistan even more remote in 2020, raising the chances of conflict between the two South Asian powers. Tensions spiked in February, when, for the first time in nearly five decades, the longtime rivals hit each other with airstrikes. The exchange began after India blamed a Pakistan-based group for a suicide bombing in Indian-controlled Kashmir that month. Ratcheting tensions up even further, Indian Prime Minister Narendra Modi's government — reelected in May — revoked Jammu and Kashmir state's autonomy in August, prompting strong condemnation from Pakistani Prime Minister Imran Khan's government. Together, the developments will make for a fraught year for bilateral relations centered on the dispute over Kashmir, where ongoing militant activity could trigger another military confrontation. Moreover, it will limit Modi's ambitions for the territory.

The deadliest attack in the 30-year insurgency in Indian-controlled Kashmir occurred Feb. 14 when a suicide attacker drove a vehicle-borne improvised explosive device into a paramilitary convoy in the district of Pulwama, killing 40 personnel from the Central Reserve Police Force. Blaming Jaish-e-Mohammed, a Pakistan-based militant group, Modi's government launched airstrikes into Pakistan 12 days later against a purported Jaish-e-Mohammed training camp in Balakot in Pakistan's Khyber-Pakhtunkhwa province, an undisputed territory. Pakistan launched its own counterstrike the next day across the Line of Control, the de facto border dividing Kashmir between both countries. As Indian jets responded, a dogfight ensued in which Pakistan captured an Indian pilot. Khan ordered his release March 1, allowing the two countries to back away from the brink.

The Pulwama attack occurred during Modi's reelection campaign, giving the prime minister a powerful issue — national security — to use to deflect attention from India's cooling economy. This helped the Bharatiya Janata Party (BJP) win in a landslide against its rival, the Indian National Congress, becoming the first party other than Congress to clinch back-to-back majorities in the parliament's lower house since independence in 1947.

Having secured another term, Modi revealed big plans for Kashmir on Aug. 5, namely, the revocation of Jammu and Kashmir state's autonomous status by rescinding articles 370 and 35A of the Indian Constitution (though India's Supreme Court is still considering the legality of this move). The Modi government also divided the former state into two centrally administered territories — Jammu and Kashmir, as well as a separate territory for Ladakh. Pakistan strongly condemned the decision, halting bilateral trade and expelling the Indian high commissioner. Khan even alluded to the possibility of military confrontation between "two nuclear-armed states" if the international community failed to intervene.

The majority of attacks in Indian-controlled Kashmir since February have continued to involve the three most active militant groups there: Jaish-e-Mohammed, Lashkar-e-Taiba and Hizbul Mujahideen, all of which have leadership based in Pakistan. They have largely used firearms in their engagements with security forces. This indicates that the vehicle-borne improvised explosive device used in the February suicide attack, the first incident of its kind in the region since 2005, did not herald a shift in Kashmiri militants' tactics.

While the February airstrikes ostensibly aimed to blunt what India alleges is Pakistani support for cross-border militant attacks in Kashmir, such attacks have persisted. The 54 security incidents in Indian-controlled Kashmir the month after the attacks resulted in 72 deaths, largely unchanged from the 68 deaths in March 2018. No dramatic uptick in militant attacks has occurred since then, but rather a drop-off. Total casualties from security encounters in September, October and November were 86, a significant dropoff from the 308 casualties during the same period in 2018.

Of course, this could be an outcome of a heightened security presence in the centrally administered territory, whose new legal status gives the central government greater control over local security operations. But the continuation of attacks in Indian-controlled Kashmir suggests that Indian strikes on its territory might not have deterred Pakistan. It could also suggest that a significant proportion of insurgents are not coming from Pakistan but are, in fact, locals. While Pakistan could still assist militants based in Jammu and Kashmir, it would struggle to exercise the same control over a localized insurgency than it would one operating from its territory — something that could cause it problems, since India might blame Pakistan for future attacks it had no control over.

Doubtless, guaranteeing security will remain Modi's priority for Kashmir in 2020. A vigorous counterinsurgency remains underway there involving multiple security detachments. The government claimed Dec. 3 that infiltration from Pakistan across the Line of Control has increased by 50 percent, creating a pretext for more retaliation against Pakistan should a sizable attack occur in Indian-controlled Kashmir. Given that low-level militant incidents in Indian-controlled Kashmir since March have not garnered a response from India against Pakistan (exchanges of fire continue across the Line of Control, but they are not examples of retaliation per se), it would appear that a significant number of Indian security personnel must die before India would be willing to send its forces across the Line of Control and risk a Pakistani response.

By fulfilling its campaign promise to revoke the autonomy of Jammu and Kashmir, the BJP took a major step toward advancing the territorial unity of India, though at the cost of undermining talks aimed at normalizing relations with Pakistan. But Indian-controlled Kashmir is still experiencing internet cutoffs; detentions, such as that of three former chief ministers of the former state; and restrictions on free movement. Until its security problems are resolved and normalcy returns, the investment and migration from elsewhere in India that Modi wants to foster in Indian-controlled Kashmir will not substantially materialize. In the meantime, the dispute over the region will continue to loom over Indian-Pakistani relations.

Kashmir Will Keep India and Pakistan at Risk of Conflict Again in 2020 is republished with the permission of Stratfor Worldview, a geopolitical intelligence and advisory firm.