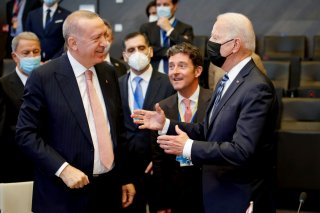 President Biden and Russian President Vladimir Putin met Wednesday and discussed a wide swath of issues including cybersecurity, human rights, and their mutual interest in holding arms control talks in the future. If, or when, those talks do occur, one issue must be on the table: U.S. tactical nuclear weapons deployed in Europe. One of the least discussed but most important elements of U.S. nuclear policy is the continued deployment of tactical nuclear weapons in Europe, a relic of the Cold War that creates more risks than security benefits.

Just last month, for example, U.S. soldiers inadvertently exposed nuclear secrets by creating publicly accessible digital flashcards containing sensitive security information about American nuclear bombs stored in five NATO countries. This included the B61s stored at Incirlik Air Base in Turkey, which should be especially alarming for those concerned about nuclear weapons falling into the wrong hands, given Turkey’s history of coup attempts, Turkish President Erdogan’s waning domestic support, and Turkey’s increasingly volatile foreign policy. For all these reasons, and more, the U.S. should remove its nuclear weapons in Turkey.

During the Cold War, the U.S. stationed the B61—a tactical nuclear gravity bomb—in NATO countries in an effort to compensate for the perceived superiority of Soviet conventional forces and to “extend” deterrence to non-nuclear allies. While the threat of a Soviet invasion is long gone, the risk of the B61s falling into the wrong hands or triggering a nuclear exchange persists.

In response to a 2016 coup attempt, the Turkish government closed the airspace over Incirlik, shut off the base’s electricity supply, and arrested Incirlik’s Turkish commander for allegedly participating in the coup and using the base to fuel planes that bombed the parliament. With Erdogan facing emerging political and economic crises, and Turkey’s civil-military relations as strained as ever, the possibility of future coup plotters attempting to seize the bombs cannot be dismissed.

In addition, the security measures intended to prevent unauthorized use of the B61s ­­were not designed to stop members of an allied military from using them and could only delay use by a junta that gained access to the bombs.

Even without considering these significant security concerns, basing nuclear weapons in Turkey does nothing to advance the interests of the United States. Turkey no longer has planes capable of delivering the B61s and does not allow the U.S. to permanently base its own nuclear-capable aircraft at Incirlik. In other words, if the U.S. ever intended to use its B61s based at Incirlik, nuclear-capable aircraft would first have to be flown into Turkey. This, obviously, severely limits the deterrent effect of the nuclear weapons based at Incirlik. Even worse, the arrival of U.S. aircraft at Incirlik for other reasons during a period of heightened tensions could make an adversary believe the U.S. was preparing for a nuclear attack, possibly even prompting a nuclear first strike in response.

In short, B61s deployed in Europe, and particularly at Incirlik, do not strengthen the U.S. and NATO deterrent— NATO’s superior conventional forces and second-strike nuclear capability do. In the words of the U.S. European Command leadership, there would be no “no military downside to the unilateral withdrawal of nuclear weapons from Europe.”

Yet, the U.S. has begun implementing an $8 billion program to extend the life of these six-decade-old bombs, even as European public and political opinion continue to turn against NATO nuclear sharing. This growing opposition to U.S. nuclear weapons in Europe could evolve into more general opposition to NATO and threaten the long-term stability of the alliance. While NATO certainly faces serious challenges, particularly as it seeks to define its purpose after the end of both the Cold War and the war in Afghanistan, the future of the alliance and Turkey’s place in it won’t hinge on basing outdated nuclear weapons in a country that does not even have planes capable of delivering them.

Unfortunately, it appears that President Biden did not discuss this pressing issue when he met with the Turkish President, Putin, and other NATO heads of state earlier this week. When he meets with NATO leaders in the future, President Biden should, at a minimum, work to remove the useless and dangerous B61s from Turkey. In any arms control negotiations, the withdrawal of U.S. B61s from Europe in return for the withdrawal of Russian tactical nuclear weapons deployed near Eastern European and Baltic NATO member states should be considered. Pulling U.S. tactical nuclear weapons from Turkey should be just one step in a process of rethinking U.S. nuclear policy, including revising current plans to modernize every leg of the nuclear triad at a potential cost of $1.5 trillion.

Will Smith is a Researcher at the Center for International Policy’s Foreign Influence Transparency Initiative and Arms and Security Program.