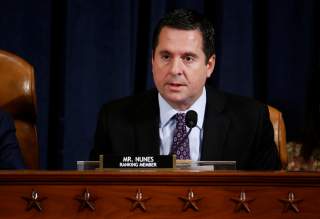 Republican California Rep. Devin Nunes is adamantly denying that he traveled to Vienna last year and met with a former Ukrainian prosecutor to dig up dirt on Joe Biden, as CNN alleged in a story published last month.

“CNN is the mother of fake news,” Nunes said in a defamation lawsuit against the network filed Tuesday in federal court in Virginia.

“It is the least trusted name. CNN is eroding the fabric of America, proselytizing, sowing distrust and disharmony. It must be held accountable.”

Nunes, the top Republican on the House Intelligence Committee, is suing CNN over a Nov. 22 report alleging that Lev Parnas, an embattled former associate of Rudy Giuliani, is willing to tell impeachment investigators that Nunes met in Vienna in December 2018 with Viktor Shokin, a former Ukrainian prosecutor.

After CNN published the story, Nunes issued a statement calling the report “demonstrably false.” The lawsuit is the first time he has denied specific claims in the CNN report.

“[Nunes] was not in Vienna in December 2018. Further, he has never met Shokin; never spoken to Shokin; and never communicated with Shokin,” Nunes lawyer Steven Biss says in the lawsuit.

Nunes accuses Parnas of fabricating the story after reviewing congressional records that showed that the Republican visited Europe between Nov. 30 and Dec. 3, 2018. But Nunes says that he only visited Malta and Libya during the overseas trip.

Nunes alleges that Parnas’ “lies” are part of a “thinly-veiled attempt” to obtain immunity from federal prosecutors or the House Intelligence Committee. Parnas and another Giuliani associate, Igor Fruman, were indicted in New York on Nov. 10 on campaign finance fraud charges. They are accused of making straw donations to political committees in order to influence U.S. policy towards Ukraine.

Prosecutors said on Monday that Parnas and Fruman will “likely” face additional charges in the investigation.

The pair began working with Giuliani in 2018. As part of the effort, Parnas and Fruman set up meetings in January 2019 in New York City for Giuliani, Shokin, and Yuri Lutsenko, who at the time served as Ukraine’s general prosecutor.

Earlier on Tuesday, House Democrats released their report of impeachment recommendations against President Trump, which shows an eight minute phone call between Nunes and Parnas on April 12.

Nunes, who has filed several lawsuits against other news outlets and political operatives, asserts that CNN knew better than to rely on unverified allegations from Parnas.

“It was obvious to everyone – including disgraceful CNN – that Parnas was a fraudster and a hustler,” Biss says in the lawsuit, which seeks $435 million in damages from CNN.

“From all the evidence in its possession, CNN was well-aware that Parnas was a renowned liar, a fraudster, a hustler, an opportunist with delusions of grandeur, a man in financial in extremis.”

Bondy did not respond to an email seeking comment. CNN did not immediately respond to a request for comment.