Obama Endorses Trudeau, But Not Biden 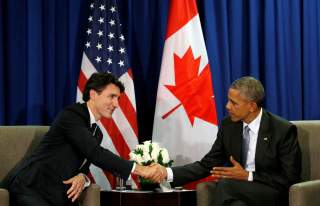 Obama tweeted Wednesday following the Democratic debates in support of the Canadian prime minister, saying that the “world needs his progressive leadership.”

“I was proud to work with Justin Trudeau as President,” Obama said in a tweet. “He’s a hard-working, effective leader who takes on big issues like climate change. The world needs his progressive leadership now, and I hope our neighbors to the north support him for another term.”

I was proud to work with Justin Trudeau as President. He’s a hard-working, effective leader who takes on big issues like climate change. The world needs his progressive leadership now, and I hope our neighbors to the north support him for another term.

But the former president of the United States has yet to endorse Biden‘s presidential run.

Biden has attempted to explain Obama’s silence by telling reporters in April that he asked Obama not to endorse him.

“I asked President Obama not to endorse and he doesn’t want to — whoever wins this nomination should win it on their own merits,” he said.

“Serving as @BarackObama‘s Vice President was a privilege and an honor. We share the belief that America is a place where ordinary people do extraordinary things and anything is possible,” the candidate wrote in a video ad posted on Twitter.

President Donald Trump suggested in June that “there has to be some reason” why Obama has not endorsed Biden, saying that Biden was lying.

Biden assured Obama aides in 2008 that they “would never have to worry” about Biden leveraging his position for a presidential run. Biden’s words came as Obama considered his VP pick between Biden, Democratic Virginia Gov. Tim Kaine and Democratic Indiana and Sen. Evan Bayh.

The former president searched for a vice-presidential pick that would add experience to his campaign, saying, “I want somebody with gray in his hair.”

Obama pushed Biden on whether he would run for president again, and Biden reportedly told Obama in response that he would not be able to forgive himself if he did not try to defeat Trump.

“You don’t have to do this, Joe, you really don’t,” Obama said to Biden, a source familiar with the situation told the New York Times.