The Odyssey of Greek Destroyer Adrias: She Cruised 730-Miles Through Hostile Waters with Her Bow Blown Off 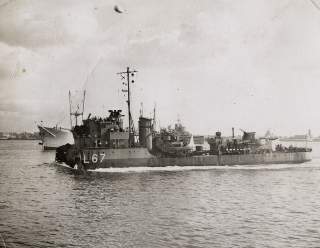 On October 22, 1943, the Greek destroyer Adrias was creeping forth on a nighttime diversionary raid in the Aegean Sea when disaster befell her from an unexpected quarter.

Christos Papasifakis, then the ensign commanding the ship’s stern 4” gun turret, recounted the nightmarish events that followed in a remarkable narrative collected and published online by his cousin George Krestas.

The ship [then] took a considerable downward angle, and I slid forward, against the gun base, while bits of metal and human parts flew in all directions, raining down like hail… A hot putrid air wave reeking of diesel fuel and burning flesh stormed through the ship that stung my eyeballs and made my lungs hurt.

A German mine had just blown the 85-meter-long vessel’s bow clean off. Her bridge lay in ruins, her captain Ioannis Toumbas wounded; her forward gun turret twisted from its mounting until its gun barrels faced the bridge. The captain’s nephew, Konstantin Themelis, lay trapped inside, his knees broken.

The surviving crew then spotted an enemy “torpedo boat.” Papasifakis readied his gun turret to open fire—only to realize he nearly had “the (dubious) honor of being the first ship in history where her stern had fired at her bow!”

But the Adrias’ ordeal was just beginning.

Battle for the Dodecanese

On April 23, 1941, naval cadet Papasfikos and several comrades fled newly Axis-occupied Greece for Turkey and from there headed south to Alexandria, Egypt. There they rejoined surviving elements of the Royal Hellenic Navy.

Adrias was a Type III model armed with torpedoes, three rapid-firing flak guns, and two twin 4” gun turrets to protect convoys against marauding submarines and bombers. Despite having run aground shortly after departing being commissioned, Adrias was credited with sinking one or two U-Boats early in 1943 (in fact, neither kill claim appears to be accurate), and supported the Allied landing in Sicily.

On September 8, 1943, Italy surrendered to the Allies. Consequently, the Italian-occupied Dodecanese islands speckling the waters between Greece and neutral Turkey were suddenly up for grabs. Their capture might deny Germany vital bomber bases, thereby opening a supply line through the Bosporus Straits to the Soviet Union.

The British inserted several battalions of infantry on the islands—but couldn’t provide air cover for the distant outposts. The Americans thought the venture foolish and refused to help. German forces in the Balkans, benefiting from air superiority, began landing operations to take back the islands one by one.

On October 20, Adrias was dispatched along with the destroyers Jervis, Pathfinder and Hurworth to resupply British troops on the Dodecanese island Leros. While two destroyers slipped into the harbor of Lakki to unload supplies on the night of October 21-22, Adrias and Hurworth launched a diversionary raid on Kalymnos island.

However, they couldn’t find any ships to sink. But as they began cruising back at 3 AM—only to come under attack by Stuka dive bombers. While illuminated the destroyers with flares, others plunged in near-vertical dives to release bombs.

Holding fire to remain concealed, Adrias did it best to dodge the bombs.

“Zigzagging and the sudden turns at high speed, oftentimes, made the ship list more than 20 degrees. But all men stood at their stations, holding to stanchions lest be washed overboard, waiting for whatever could happen next. Meanwhile, the bombs falling around us raised enormous columns of water drenching everyone and creating massive waves smashing onto the sides of the ship accentuating Adrias' pitching and rolling and causing the deck edge occasionally to be underwater…”

Eventually, the Hurworth’s crew tossed a smoke float into the water, diverting the bombers’ attacks. The destroyers slipped away in the darkness—accidentally dipping into neutral Turkish coastal waters, dodging shells fired by a garrison at Kefaluka.

But Adrias received unwelcome news—the other two British destroyers hadn’t been able to unload their cargo. So Adrias and Hurworth sortied again on the same mission at 7:30 PM on October 22, again dodging fire from a Turkish battery while crossing the strait of Kos.

But the Germans had laid mines along the path of their previous night’s sortie, resulting in the deadly collision at 9:56 PM described at the beginning of this article.

Captain Toumbas refused to abandon his crippled ship, so Hurworth moved within 100 yards to evacuate the many wounded.

Papasfikas describes what happened next:

“All eyes were on [Hurworth] when a thunderous orange fireball erupted at her middle, lifting her up in the air and cutting her into two pieces. Immediately, a torrent of water, lethal objects, and human body parts rained on us... When I kicked to the side a boot that bounced off my helmet, to my horror, I realized that there was a severed foot still in it.”

Hurworth had fallen victim to another German mine. Adrias’ shellshocked crew launched lifeboats into the oil-slicked waters, managing to rescue many crew including her captain. Other sailors managed to swim ashore to the island of Pserimos and were sheltered by the locals. But out of 198 crew, only 85 survived.

Having recovered Hurworth’s survivors, Toumbas now sought to nurse his command to safety. The bowless destroyer was reduced to a “pulverized cauldron of mangled steel and flesh” and listing 15 degrees to starboard.

But Adrias’s boilers still functioned, so Toumbas cruised towards neutral Turkey, rely on the stars to navigate, having lost his maps and compasses. Though her rudder was useless, Adrias could clumsily maneuver by alternating power to one screw or the other.

At 1 AM on the morning of October 23, Toumbas beached Adrias next to the Turko-Cretan fishing village of Gumsluk—which happened to harbor a British agent under the cover name Hasan Bey.

Bey helped contact the local British consul in Smyrna, and the wounded crew from Adrias were swiftly evacuated.

Eventually, a Turkish Army officer arrived and notified Toumbas his ship had twenty-four hours to leave. According to Papasfikas, Toumbas gestured that they were welcome to try to get past his destroyer’s remaining 4” gun. But more likely, pressure from Allied diplomats persuaded Ankara to turn a blind eye to the destroyer’s presence, as the Turks were aware which side was winning the war

For thirty-nine days, the destroyer’s crew affected repairs in Gumusluk, creating a temporary forward bulkhead to seal off Adrias’ severed bow. Most of the wounded and non-essential personnel were safely repatriated by land, while dead British and Greek crew were buried with ceremony in a local cemetery.

German spy planes periodically checked on their progress—waiting for the chance to pounce. The Greek crew could only watch from a distance as German paratroopers landed on Leros, enveloping the British garrison.

On the morning of December 2, the locals at Gumusluk awoke to find telephone lines sabotaged, powerlines cut, and the Adrias missing. The sabotage had been undertaken the evening prior to buy the ship time before her absence was reported by local spies.

The Royal Navy supported the escape in Operation Tableland, detaching motor gunboats guided by a naval attache in Smyrna to escort the destroyer to Kastellorizo, and civilian fishing boats loaded with barrels of petrol refueled by Adrias at sea.

The bow-less destroyer would need every ounce of luck on the 730-mile journey to evade deadly Ju-88 bombers based at Rhodes. The crippled destroyer hid in small coastal coves during the day, beaching herself for lack of an anchor. At night, she steamed backward along the Turkish coastline, still listing 15 degrees.

Close calls abounded. A fortuitous sea squall doused a searchlight which briefly painted Adrias while crossing the strait of Kos. Then she narrowly avoided colliding with a German hospital ship. The destroyer was raked again by Turkish coastal guns at Cape Karalouka.

At a cove on Kastellorizo island, she met with destroyers Jarvis and Penn and a tugboat to tow her—only to be spotted by a German observation plane at noon.

The destroyer captains decided to risk departing in daylight at 4:30 PM. Three hours later, the ship’s crew observed from a safe distance as Luftwaffe bombers pulverized Kastellorizo with bombs.

Finally, on December 9, the bowless destroyer cruised into Alexandria, Egypt, newly scrubbed down as if for a parade review. She was greeted by a host of jubilant sailors and admirals, and her return was announced by Churchill in the British parliament.

Adrias was never fully repaired, and was scrapped shortly after the war’s ending. Toumbas and Christos both became admirals after the war. Blacklisted for criticizing a 1970 military coup, Christos was later recommissioned as Chief of the Naval General Staff. He passed away in 2014, just a year after recounting his remarkable adventure to his cousin.