Oh My: Meet the Successor of the Black Hawk Helicopter, The FLRAA 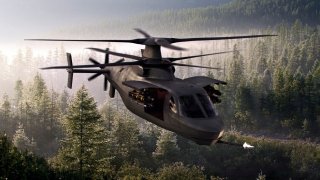 More lethal, semi-autonomous, slightly stealthy, and twice the speed and range of a Black Hawk helicopter are just a few of the terms used to describe the Army’s emerging Future Long-Range Assault Aircraft (FLRAA), a now-underway developmental effort slated to deploy by 2030.

Calling it a future Black Hawk would both be correct and reductive, as the new aircraft will assume all of the utility helicopter missions such as infantry transport, MEDEVAC, cargo delivery, and some reconnaissance, the new FLRAA will likely take on an even broader mission scope given that it is being architected for warfare in the 2030s and beyond. Case in point, an Army report described the new aircraft as something which will “augment” and not necessarily “replace” the Black Hawk.

Two aircraft are now flying, one from Bell Helicopter building the V-280 Valor and another from a Lockheed-Sikorsky-Boeing team called the DEFIANT X. The V-280 is engineered to be a next-generation tiltrotor compound configuration and the other is built with counter-rotating coaxial rotor blades and a back-end thrust propeller to achieve massive new amounts of speed and in-flight stability.

Due to welcome, yet unanticipated progress, the FLRAA program has been accelerated by as many as four years,  Brig. Gen. Walter Rugen, director of the FVL Cross-Functional Team. Rugen explained to The National Interest in an interview last year.

A key element of the acceleration is what Rugen called an ability to “upgrade at the speed of technology.” This means that software and hardware configurations are being engineered to accommodate new weapons, sensors, computer systems and engine technologies.

The FLRAA, has been surging forward following a multi-year science and technology development program called the Joint Multi-Role Technology Demonstrator program. This means that, when viewed with a total mind to its requirements and new technological capabilities, the FLRAA may be destined to be “much more” than a Black Hawk; developers told me years ago during the early S&T phase in 2011 that the intent for the new aircraft was no so much to build something based on the best available technologies, but rather architect something technically upgradeable so as to operate successfully in the 2030s and beyond. This amounts to a technological configuration and sophistication sufficient to embrace a new sphere of missions beyond those intended for even the cutting-edge, upgraded Black Hawk M helicopter.

“We will have to be synchronized and integrated across a network and continue to evolve as things change in the 2030s,” Heather McBryan, Boeing sales and marketing director, Future Vertical Lift, told The National Interest in an interview.

A Black Hawk is reported to be able to hit speeds up to 150 miles per hour, therefore something twice as fast would be quite fast. While the exact speed of the DEFIANT X is not available, likely for security reasons, Bell reports its V-280 can hit speeds of 280 knots. The DEFIANT’s predecessor, called SB > 1 DEFIANT is reported by Sikorsky developers to have reached speeds greater than 230 knots, adding that innovators continue to push the envelope beyond that with the DEFIANT X. The DEFIANT X builds upon Sikorsky’s history of developing coaxial rotor blades to break new ground with helicopter speeds, as years ago its Raider helicopter set new records by flying 220 knots in 2008. Bell developers tell The National Interest that their V-280 has hit 305 knots.

The U.S. Army's Black Hawk Helicopter Could Serve for 50 Years (or More)