Oh My: This Photo Shows an F-35C Firing a Sidewinder Missile Flying Upside Down 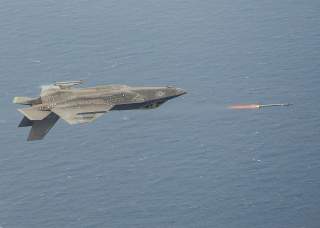 The AIM-9X Block II missile is the current version of the AIM-9X.

No the U.S. Navy F-35C Lightning II in this photo is not keeping up foreign relations like Maverick and Goose in the legendary movie Top Gun.

The AIM-9X missile is the most advanced infrared-tracking, short-range air-to-air and surface-to-air missile in the world. It is configured for easy installation on a wide range of modern aircraft, including the F-15, F-16, F/A-18, F-22 and F-35 fighters.

The AIM-9X is the fifth generation Sidewinder and features a high off-boresight focal-plane array seeker mounted on a highly maneuverable airframe with a greatly improved infrared anti-countermeasures capability.

The AIM-9X is a true dual-use missile, effective in either air-to-air or surface-to-air applications with no modifications required. In fact it is compatible with the U.S. Army’s ground-based multi-mission launcher.

The effectiveness and versatility of the AIM-9X missile have been combat-proven in several theaters throughout the world and it is actively deployed not only on U.S. Navy and Air Force aircraft, but also in the air forces of 18 international customers.

The AIM-9X Block II missile is the current version of the AIM-9X.

Noteworthy, as we have recently reported, on Jun. 18, 2017 an F/A-18E Super Hornet from VFA-87 Golden Warriors fired an AIM-9X against a Syrian Sukhoi Su-22 that had dropped bombs near U.S. backed forces, in the form of the Syrian Democratic Forces (SDF) but, quite surprisingly, the Sindewinder missed the Fitter that was subsequently shot down by an AIM-120 AMRAAM fired by the same F/A-18E.