Is An Oil Price Crash Coming? 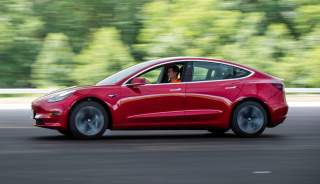 Plunging prices for batteries and renewables are driving an electric vehicle (EV) revolution so rapidly that the economics of oil “are now in relentless and irreversible decline.”

That’s the startling conclusion of a detailed new analysis for “professional investors” of the economics of EVs versus gasoline cars produced by BNP Paribas, the world’s eighth-largest bank by total assets.

The report is good news for humanity because it means peak oil demand may be less than a decade away, which in turn means ambitious climate goals will be more affordable than previously thought.

But the bank’s analysis, “Wells, Wires and Wheels,” is devastating for Big Oil. It concludes that “the oil industry has never before in its history faced the kind of threat that renewable electricity in tandem with EVs poses to its business model.”

Within a few years, electric vehicles (EVs) will be superior to gasoline powered cars in every respect. In part, that’s because electric motors are vastly more efficient than gasoline engines. And it’s also in part because solar and wind power and batteries have seen staggering price drops in the past decade — and are projected to see equally big drops in the coming years.

But one of the most startling findings is that because the cost of running EVs on solar or wind power is dropping so rapidly, the only way gasoline cars can compete with these renewable energy-powered EVs in the 2020s is if the price of oil were to drop to $11 to $12 per barrel. The current price of oil is over $50.

Even worse for oil, this economic analysis doesn’t even factor in many of the other benefits of running cars on renewable power rather than oil. These include the vast public health benefits of not breathing air pollution from burning oil, along with the benefits of not having huge oil spills and of not destroying a livable climate.

Lewis notes that many independent analyses — including Bloomberg New Energy Finance and the risk management firm DNV GL — have concluded that in the 2022-2024 timeframe, the total lifecycle cost of owning an EV will be cheaper than that of owning a gasoline-fueled car.

The report also looks at the lifecycle costs of oil (drilling, production, and transportation) versus the life-cycle cost of renewable power plants (building and operating).

“We think the economics of renewables are impossible for oil to compete with when looked at over the cycle,” the study concludes.

If the future is so bad for oil, then why hasn’t there been a crash in either the price of petroleum, or the stock prices of major oil companies?

“There is a catch, and it is a big one,” explains the report, “oil has a massive incumbency advantage.”

Right now, oil is benefiting from the fact that its entire production and delivery system was built over decades and that investment gives oil a big short-term advantage over EVs, which have yet to build-out their fueling infrastructure globally.

“The clear conclusion of our analysis is that if we were building out the global energy system from scratch today,” Lewis explains, “economics alone would dictate that at a minimum the road-transportation infrastructure would be built up around EVs powered by wind- and solar-generated electricity.”

But oil has a big head start. And, of course, Big Oil uses its vast current income to buy political power so that it can slow down investment and government policies aimed at advancing electric cars.

Lewis, however, argues that from a policy perspective, governments need to start making much bigger investments in electric cars and their fueling infrastructure, simply because the economics are becoming so good for EVs and the public health and climate benefits are so huge.

Since BNP Paribas is a big bank and the report is for investors, though, a key point of the analysis is that oil companies are investing staggering amounts of money in finding and producing new wells — and most of them are going to lose a lot of that money.

“By the late 2020s” Lewis explains, a significant fraction of the oil produced today “might only be competitive at a price below [oil companies’] full cost of production.” Even worse, this fraction “will rise over the lifetime of these projects as the penetration rate of EVs increases.”

If you can’t produce oil profitably at under $10 or $20 a barrel, your oil company is in big trouble.

From a broader perspective, Lewis warns that all this money currently being spent on finding and producing new oil is a huge waste — “an opportunity cost to society as a whole.”

Exactly how big a cost? BNP Paribas calculates “the size of that opportunity cost is $24 trillion over the next 25 years on gasoline alone.” And that’s without counting the cost of saving a livable climate.

It’s time for investors and governments to walk away from Big Oil before the crash — and before it’s simply too late to save our children and future generations from catastrophe.