Oil War: The Showdown Between Russia and Saudi Arabia Could Get Serious 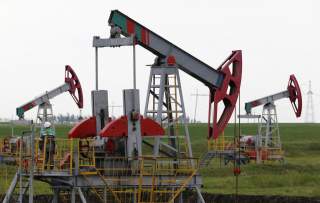 Despite mounting fears of coronavirus-related drops in global oil demand, Saudi Arabia recently signaled its intent to flood the market with even more discounted exports following Russia's rejection of proposed OPEC+ production cuts. In doing so, Riyadh is hoping to force Moscow back to the negotiating table, though such a gamble is almost sure to backfire — and badly.

For one, Russia has long been wary of shrinking its oil output for fear of also shrinking its market share, and is thus unlikely to quickly cave to Saudi Arabia's demands. And compared with Riyadh, Moscow also has more cash reserves to ride out a period of low prices. Saudi Arabia's oil-dependent economy, on the other hand, will be among those hardest hit from the very price cuts to it's now willingly helping to exacerbate.

Following Russia's recent falling out with Saudi Arabia on production cuts, the meeting of the OPEC+ Joint Technical Committee scheduled for March 18 — which Russian officials had previously said they would attend — was canceled. Russian Energy Minister Alexander Novak then put the nail in the coffin on March 13, telling Russian state media that Moscow sees no basis for returning to negotiations with its former OPEC+ partners. Russia’s decision to pull out was precipitated by the Saudi-driven ultimatum to back a 1.5 million barrels per day (bpd) of production cut through the end of 2020. But in many ways, Moscow's response was a long time coming, and reflects its focus on market share and long-term revenue maximization.

Russian commitments to production cuts under the OPEC+ framework has never exceeded 300,000 bpd. Saudi Arabia, by contrast, has consistently overperformed on its obligations since the initial December 2016 agreement on production restraint. Compared with Saudi Arabia, Russia has also often taken longer to implement cuts. As a result, Russia has largely maintained its volume in recent years, and even benefited from the 2017-2019 price surge, while failing to bear anywhere near a proportional share of the burden — a trend that has increasingly frustrated Saudi Arabia. In fact, Russian production of hydrocarbon liquids was actually higher in the first quarter of 2020 than it had been in December 2016.

Deputy Prime Minister Igor Sechin — who's also the CEO of Russia's state-owned oil giant, Rosneft — has vocally opposed participating in OPEC+ from the beginning, but was overruled by President Vladamir Putin. However, the Russian oil industry’s argument against ceding more of its market share has been strengthened since the prices for Brent crude oil futures surged past $70 in 2018. This resulted in U.S. production growth of more than 2 million bpd in 2019, offsetting demand for Russian crude (as well as the entirety of global demand growth). But U.S. shale isn't the only price-sensitive supply. Roughly half of the supply growth is now coming from outside the United States as well, mostly from deepwater projects in Norway, Brazil, and Guyana.

In mid-2019, Putin publicly opposed Saudi Arabia's push for higher prices, saying he viewed the $60-$65 range as "comfortable." Then in March, concerns about both slowing economic growth and the early development of the coronavirus pandemic dragged Brent prices down further to the $50 range in early March, which Russian officials including Putin repeated that they still remained comfortable with. It should thus perhaps come as no surprise that Moscow turned down the Saudi-led production cut proposal in the March 5-6 meeting between OPEC+ ministers.

Moscow's View of the Market

All of this suggests that the Russian leadership has accepted a pessimistic view of the current market and believes that prices need to spend some time below their equilibrium to temper higher-cost supply for both short-cycle shale and longer-cycle offshore products. The Russian government's position was recently made very clear by Deputy Energy Minister Pavel Sorokin. In an interview with Reuters, Sorokin said Russia intended to let market forces deal with the surplus, expecting initial signs of weakness in competing supply in four-to-six months. He also alluded to longer cycle offshore supply, saying that if Russia had agreed to the Saudi demand for a large OPEC+ cut, it would have led to investment decisions facilitating competing supply growth three-to-four years out. Surprisingly, he put forward the view that Russia's equilibrium is the $45-$55 per barrel range, which he said should be comfortable for producers and allow demand to recover.

In going this route, Russia is accepting a period of significant fiscal pain to maximize revenue gains in the long-term. Alexei Kurdin, the head of the Accounts Chamber of the Russian Federation, said that current oil prices would reduce government revenue by $42 billion, and that the price collapse and weakening of the ruble would force Russians into increasing poverty. As the parliamentary body that oversees financial control, the Chamber's forecasts tend to be more pessimistic than the Russian government's outlook, but are often more accurate.

The Russian Central Bank said it was better prepared and had higher reserves to deal with a price collapse now than it was during the 2014-16 collapse. With Russia’s main export oil blends, Urals, likely to remain below $41.62 per barrel for the remainder of the year, its foreign exchange reserves will take a hit. Social spending will suffer as a result, and Russia’s regional governments will deplete their reserves and be forced to borrow. But Russia's overall fiscal breakeven for Urals is in the mid-$40s. And this, combined with the fact that hydrocarbon exports make up less than 35 percent of overall government revenue, puts Russia in a stronger position than Saudi Arabia to take the pain of falling crude prices. But despite these Risks, Moscow has calculated that long-term revenues would suffer with the loss of market share due to production cuts. And that in the absence of an OPEC+ agreement, competitors will begin to change their investment decisions soon regardless, though most of the volume loss would likely be in 2021 after prices bottom out and begin to recover.

Saudi Arabia also has a financial cushion to maintain its current standoff, with roughly $502 billion of reserves. But with Riyadh's fiscal breakeven at over $80 per barrel, lower oil prices will begin to drain those reserves much more quickly than Russia's reserves. The kingdom's 2020 budget was based on a 6.4% deficit with Brent crude oil prices at $65 per barrel. This has fueled Saudi Crown Prince Mohammed bin Salman's recent push for higher prices, as well as his willingness to take a losing gamble that Russia would cave to an ultimatum for a large cut once they were confronted with the prospect of a price collapse. But his decision to retaliate against Russia by slashing its oil prices and ramping up output risks backfiring, and badly.

The kingdom's state-backed oil giant Saudi Aramco announced it was cutting prices on March 7, and then pledged to supply the market with 12.3 million bpd of crude oil and petroleum products just two days later. That is more than the kingdom can actually produce each day based on Saudi Aramco's current infrastructure, despite claiming to have a capacity of 12.5 million bpd. But the move alone was enough to send prices tumbling. In response to OPEC+'s failure to reach a production cut agreement on March 6, Brent crude prices had closed at $46. But when after-hours trading resumed the night after Saudi Arabia announced its decision to increase production on March 7, it had dropped an additional $13 to $33.

This illustrates a part of the dilemma for Riyadh. Compared with Russia, Saudi Arabia finds the prospect of Brent prices recovering only to the $45-$55 range by late 2021 much less comforting. Of course, such a range is not ideal for Moscow either, but it is much more tolerable as Moscow is draining reserves at a slower pace and can hope to recover to their budget-balancing point in 2021. But as Saudi Arabia pounds prices into the ground, Brent futures could soon fall in the $20-$30 range.

If prices stay in the $30s or below for most of this year, Saudi Arabia will be forced to curtail social spending, as well as further delay the expensive projects under its already troubled Vision 2030 economic diversification program. For smaller producers elsewhere, this will drop prices below not just profitability but current operating costs, and forcing some competing supply offline. As oil demand falls, supply will eventually and dramatically contract elsewhere heading into 2021. But the inventory overhang will still prevent prices rising back to $60 while there is an inventory overhang, while Russian reserves would stabilize at $45-$50.

This leaves a situation in which there are several plausible outcomes, with the most likely being that OPEC+ never reaches a deal to cut production and the physical market eventually corrects itself (as Russia anticipates). Within that scenario, Saudi Arabia's behavior becomes all the more crucial. Even without a formal deal with Russia, Riyadh could push OPEC or a smaller break-off group with other Gulf Arab nations to undertake a production cut, which would mean less financial pain for everyone, but particularly the Saudis, and a faster return to equilibrium. Such a cut could be done informally to avoid the appearance of capitulation, and could also still allow Riyadh the option of gradually taking more market share later on (though that would require keeping prices below $60 to prevent another resurgence of U.S. shale and other higher-cost production).

The alternate scenario is that the financial pain of dropping oil prices eventually brings both Saudi Arabia and Russia back to the table. A Russian capitulation and acceptance of the original Saudi-led OPEC proposal is unlikely, given that Russia clearly wants to avoid a feedback loop where production cuts yield a premature price recovery that ends up cutting into its market share. But that doesn't mean a smaller deal where the Russians commit to a modest cut and the Saudis again bear more of the burden isn't a possibility, or even a Russian capitulation and acceptance of the original Saudi-led OPEC proposal. Given the relative financial strength of both Moscow and Riyadh, this is perhaps the most probable outcome should Saudi Arabia and Russia reopen negotiations. Such a deal could try to jumpstart the market back to the $45-$55 range that Sorokin outlined, which would be a climbdown for the Saudis and a loss of face for Crown Prince Bin Salman, but it would lessen the burn rate on Riyadh's reserves.