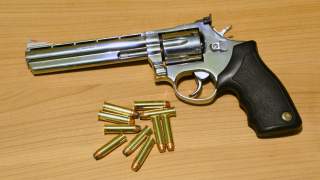 I grew up in a home where watching The Lone Ranger was a very common form of entertainment. I watched episode after episode of the series with my grandfather during weekends, and I remember when I was six years old, he bought me a toy revolver. I wept when it broke years later.

When I was 10 years old I would sneak into my parents’ room whenever they’re away just to fondle the Smith & Wesson 686 hidden in my father’s nightstand, and I had my fair share of scolding from getting caught a few times but it didn’t matter. All that mattered was I get to hold the damn thing.

Fast forward to today, I’ve owned and sold a few revolvers but I still have two in my collection: one is a parkerized Rock Island M206 chambered for the .38 Special, and the other is a stainless Taurus 689 with a 6-inch barrel chambered for the venerable .357 Magnum.

I know, I know. You’d think I’m cheap because of my El Cheapo RIA and Taurus revolvers — and yes, you’re absolutely right. I never shy away from the fact that I like the cheaper and more affordable options on just about anything, from food and wine to computer hardware to firearms.

MY VERY OWN “COLT PYTHON”

Well, I’ve always been a sucker for revolvers with a vented rib and full underlug, all thanks to the first Resident Evil video game that came out in 1996. It caused many nightmares and countless sleepless nights in my adolescent years, but it introduced to me the legendary Colt Python — which could easily make it to the first or second spot of our Top 10 list, if Colt didn’t stop manufacturing them some decades ago.

I have no intention of spending upwards of $2,000 on the few NIB or mint condition units still available online.

And I don’t think I can legally purchase any Colt Python copies like the Italian 1955 Model P (a Python copy supposedly going to be produced by Italian company Fap Pietta for the US market but was canceled for some reason) or the Turkish Gumusay (a Python copy produced by Turkish companies Küssan A.Ş. and MKEK but the factory was reportedly shut down).

So I had to make do with the Taurus 689, which looks similar to the Python because of its vented rib and full underlug. It’s a shameless copy of Colt’s most respected “snake gun” as far as aesthetics.

And unlike a lot of Taurus owners I know, I consider myself very lucky as I’ve never had a single issue with it. I’ve lost count of how many rounds I shot in it but then I stopped counting after emptying around 30 boxes of factory .357 Magnum rounds within the first six months of my purchase.

My Taurus 689 is a fine nightstand gun that’s as aesthetically pleasing as it’s reliable. It will get the job done. And with proper care and maintenance it should outlast me, heck my grandsons would still probably be able to shoot it someday.

But it’s no Colt Python.

So on to the subject of this article. Recently I’ve been looking up the newest .357 Magnum revolvers on the market as I’ve yet again started feeling that all too familiar “itch” to buy another one. For what purpose?

I’m not really sure yet — I could use a new revolver for backup carry or maybe for hunting whitetail or maybe just so I have another piece to brag about. Maybe I’m just like any other gun nut — I want a new piece for no particular reason other than to add to my collection.

Or maybe I’m just getting tired of staring at my Taurus 689, beautiful as it still is, and I just want a new .357 Magnum revolver for a change.

So I decided to create a list of what I think are some of the best .357 Magnum revolvers in 2018 for any budget. If you’re new to revolvers or you’re more like myself and you’re looking to make a purchase for whatever purpose, stick around. Maybe you’ll find info to help you make a good decision.

Before we kick things off, just a few words of caution for our newbie friends (feel free to skip this section of the article and jump straight to the recommendations part if you don’t consider yourself a newbie):

You might see people flicking their revolver’s cylinder after loading ammo in the chambers (this is very common in movies). This might look “cool” but constantly doing this will break your gun.

The weight of the cylinder (empty or loaded) can bend the yoke, i.e. that part of the crane that holds the cylinder in place and aligns it to the frame.

A revolver’s cylinder typically locks up from within these three places:

If you noticed, all these locking mechanisms utilize tiny pieces of metal (which are commonly MIM or metal injection molding parts, i.e. not as strong as forged metal). These pieces can break with repeated flicking of the cylinder. Breaking any of these pieces will render a revolver unusable.

So whatever you do, don’t flick the cylinder when loading your revolver. It only looks cool to the ignorant and undiscerning.

My Taurus 689 manual specifies not to dry fire as it can break the transfer bar safety inside the gun. But I’ve seen a friend’s Ruger GP100 manual and it says it’s okay to dry fire the gun.

Dry firing has its benefits (whether you want to develop muscle memory for proper grip and trigger pull without spending too much on ammo or it’s just raining outside or your neighbor’s just a crybaby). But consult your gun’s manual first if you’re going to dry fire.

If it’s not on the manual and you really want to be on the safe side, consider buying or making DIY snap caps.

You may have heard or read somewhere that it’s safe to shoot .38 Special in a .357 Magnum revolver, and yes it is.

But there’s a caveat to this dual-caliber feature. Since the .38 Special’s case is shorter than the .357 Magnum’s, shooting a lot of .38 Special rounds will result to lead fouling a little further back inside the chambers. If all that lead buildup isn’t thoroughly cleaned, loading the same gun with .357 Magnum ammo and firing them might result in their empty cases getting stuck in the chambers’ walls.

So if you’re looking to shoot .38 Specials in your .357 Magnum revolver, just make sure you clean it thoroughly after each shooting session. If you don’t know how to use a bore snake, our detailed guide might help you.

Because of the revolver’s inherent design, they’re all susceptible to flame cutting (except the old Nagant M1895 which uses a unique gas-seal system, but it fires weaker rounds and is an entirely different topic) — and there’s a never-ending debate among revolver enthusiasts as to how big or small the issue really is. But what is flame cutting?

Unlike a semi-auto handgun where the chamber (the part that holds the cartridge) is integral to the barrel (being a single piece of steel with the chamber recess machined to it), a revolver has six chambers in its rotating cylinder.

Because the cylinder has to rotate, it is an entirely separate part from the fixed barrel. As such there’s a gap between the cylinder and the rear of the barrel where the forcing cone is. This gap is aptly and commonly referred to as the cylinder gap.

The measurement of the cylinder gap varies depending on different revolver manufacturers’ specifications, but all revolvers have this gap.

Whenever a loaded revolver’s trigger is pulled, the expanding hot gases that push the bullet out of the cylinder and into the revolver’s forcing cone escapes through the cylinder gap. This results in a cosmetic damage on the bottom part of a revolver’s top strap that gets more and more visible with continued shots.