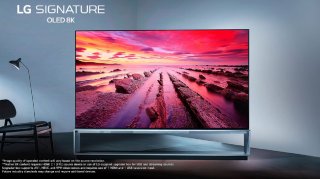 A new car? A down payment on a home? That’s right, if you want to get your hands on the LG Signature Z9 88-inch 8K OLED TV, that is the ballpark price range we’re talking about -- $30K!

Yes, this isn’t a TV purchase for everyday folks out there. But is it worth that kind of cash?

Probably not right now, but it is so new and fantastic that people with financial means might make that splurge. Eventually, the price point will fall to a more practical level that will make having this particular TV in middle-class homes commonplace.

For $30K, you would expect it to be an incredible TV -- and it is. There have been plenty of reviews for 4K OLED TVs, but this is something totally different. Along with the 8K, bezel-less screen panel, it boasts an updated version of LG’s second-generation Alpha 9 processing chip, which has been fully optimized for the higher data and resolution (no lag, so perfect for hardcore gamers out there). There's also an upgrader box to keep the decoding current and the sound is pretty spectacular via Dolby Atmos.

In short, it really is a work of art. What the Z9 is showing the world is that we could finally have a winner in the OLED vs. QLED battle -- and it’s OLED in a TKO. If this 88-inch beast is any indication, the future of OLED TVs indeed looks bright. Just imagine the innovative tech that will be part of such TVs in five to 10 years.

First appearing in the market in 2013, OLED TVs have since gained a strong loyal following, and the technology has been utilized quite often in top smartphones. Thanks to continuous improvements in tech and manufacturing efficiency, price points have gone down while the picture quality has risen steeply.

So what makes 8K OLED TVs so different? The secret sauce is that the LG Z9 uses an 8K (7680 x 4320) 10-bit OLED panel. What this means for the layperson is that the TV is equipped with more than 33 million self-emissive pixels. Aside from that massive number, the operative word is self-emissive. OLED uses pixels that when electricity passes through them, they light up in different colors. Unlike QLED TVs, there is no need for backlighting.

The advantage is that there are no longer dark pixels being lit from behind. When OLED pixels can remain completely dark, the black color on your screen is 100 percent true. Who doesn’t want that? OLED TVs also use additional white light to manufacture even more varied colors, which make for images that are diverse, richer and more accurate. Moreover, don’t forget that OLED TVs can be designed slimmer and are environmentally friendly because they use less energy than their counterparts that depend on backlighting.

With all of these benefits to be had, 8K OLED really is the anointed one that will propel forward the future of TVs.