On Omicron, Is There Reason for Hope? 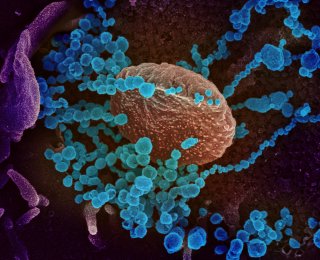 The Omicron variant is currently burning through the population of the United States, infecting both the vaccinated and unvaccinated alike. Many prominent people, including professional athletes, have also reported becoming infected a second time since the start of the pandemic. Cases caused by the new variant have been reported in eighty-nine countries, with infections doubling every 1.5 to 3 days, according to CNBC. Omicron is now the dominant variant in the United States just over a week after it comprised only about 3 percent of infections.

But the same report suggested that there is some good news about the new variant.

There are a few reasons for this. The virus seems to lead to milder illness on the average than has been the case with the original virus or subsequent variants. Death and hospitalization rates are lower now than they were during past peaks in most countries, and the first death in the United States from the new variant wasn’t reported until earlier this week.

A recent study in Hong Kong shows that there is a lower rate of the virus in the lungs than was the case with past versions of the virus. Also, now there are vaccines and boosters available that were not available when the virus first emerged. Additional promising new drugs are on the way too.

“We have anti-viral drugs which will work against Omicron, vaccines that work to an extent and can be improved, and lateral flow tests which allow us to check our infection status in real-time,” Lawrence Young, virologist and professor of oncology at the University of Warwick, told CNBC.

The other piece of good news came from South Africa, the country where the Omicron variant was first reported around Thanksgiving. New data from that country indicates that the surge in South Africa has passed its peak, less than a month after the variant wrist appeared, according to the Associated Press.

South Africa had reported 27,000 new cases last Thursday, a new high, but that number was down to 15,424 by Tuesday, the Associated Press reported. Numbers have also decreased in the variant’s original epicenter, Gauteng province.

“The drop in new cases nationally combined with the sustained drop in new cases seen here in Gauteng province, which for weeks has been the center of this wave, indicates that we are past the peak,” Marta Nunes, a senior researcher at the Vaccines and Infectious Diseases Analytics department of the University of Witwatersrand, told the Associated Press.

Whether that pattern will be replicated in the United States remains unclear, but it does show a good sign in this stage of the pandemic.