One of America's Last Battleships Fired 5,688 16-Inch Shells During the Vietnam War 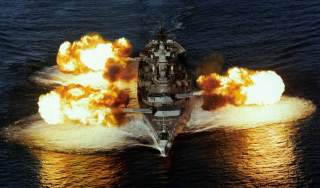