One of the Navy’s Most Advanced Submarines Hit a Mountain 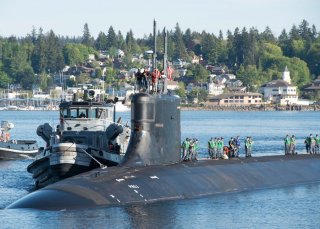 During an operation in international waters in the South China Sea, the USS Connecticut hit what the Navy described as an uncharted seamount.

The USS Connecticut, one of the Navy’s three Cold War-era Seawolf-class nuclear-powered submarines, collided with an object while underwater last month, leading to wild online speculation. Did the submarine hit a ship? Or maybe another submarine? The Navy’s 7th Fleet, based in Yokosuka, Japan, and one of the largest, put those conjectures to rest.

Initial reporting on the USS Connecticut’s mishap did not specify what precisely the submarine hit.

A photo, recently published by the Navy, seems to support the Navy’s belief that the Connecticut hit a seamount. In the photograph, taken in Guam, Secretary of the Navy Carlos Del Toro can be seen, with what is very likely the Connecticut in the background. Though only the submarine’s sail can be seen, it is intact and supports the theory that the submarine hit an underwater seamount rather than a ship.

It remains unclear if the submarine sustained damage below the waterline or how extensive the Connecticut’s bow damage is.

Getting the Seawolf seaworthy again won’t be easy. In a House Armed Serviced Committee hearing on depot modernization and optimization, Acting Assistant Secretary of the Navy Frederick J. Stefany told lawmakers that “If we ended up [reparing the Connecticut] in one of the public shipyards, that would certainly cause perturbations in all the other work in the shipyards,” and exacerbate a backlog of maintenance work.

Committee member Joe Courtney largely concurred during the hearing, though stressed that the Navy should do repairs, given the Seawolves’ unique capabilities. “Right now, it’s in Guam, that’s public record, there is no dry dock in Guam, hopefully, a sub tender can do the work, but that remains to be seen,” he explained. “It just shows how… the world gets a vote and things change and unexpected incidents create more demand for repairs.”

“The attack subs have always been the poor cousin in the public shipyards in terms of getting priority, but we know particularly a Seawolf-class submarine is extremely valuable in terms of the mission in that part of the world.”

The Seawolves are the Navy’s smallest class of submarines, just three in total. The end of the Cold War effectively ended the need for advanced and expensive Seawolf submarines, resulting in a relatively diminutive class size from a planned twenty-nine subs.

Given the Seawolf’s tiny, three-boat class size, it seems likely that the U.S. Navy would be willing to sink money into repairing the USS Connecticut, especially considering the submarine’s unique capabilities.