The One Reason Glock Stands Above All the Rest: The Trigger 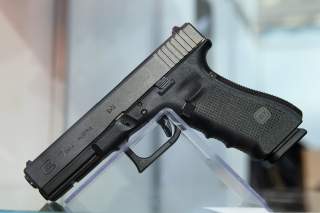 Key point: Not all striker-fired pistols are the same.

When Glock released the Glock 17, it reinvented the striker-fired pistol. While strikers saw some usage in early semiautomatic pistols like the Savage 1907 and Ruby, they largely faded into obscurity as hammer-fired designs came to dominate pistols design during WWII and in the immediate postwar era. H&K made a brief attempt to revive the striker with the VP70, a polymer frame striker-fired pistol that came before the Glock, but the striker design in the VP70 resulted in a horrendous trigger pull and limited the success of the pistol.

However, Glock implemented a new way of implementing a striker-fired trigger. Not all striker-fired pistols are the same. The Savage 1907 used a pseudo-hammer to draw the striker back, where it could be released, resulting in a very short and light trigger pull. However, this design required a manual safety to hold the striker in place to be carried safely.

Conversely, the VP70’s trigger drew the striker back and released it in the same pull. As the operator was fighting the strong striker spring during the trigger pull, it was notoriously heavy and made the pistol unpopular. However, the trigger was fairly safe.

Glock’s trigger combines the two aspects and increases the safety of the design. The striker is partially cocked via the first few millimeters of rearward movement of the slide. Once cocked, the striker is locked by the striker safety, which prevents the firing pin of the striker from protruding from the bolt face.

This system of a “pre-cocked” striker allowed for a short, light trigger pull similar to most hammer fired single action guns, but with the additional inbuilt safety mechanisms most traditional single action guns lacked.

Similar pre-cocked strikers are present in almost every other polymer-framed striker-fired pistol, with minor changes to avoid infringing on Glock’s patent. H&K’s VP9, for example, features a rotating striker safety instead of a button-style one on the Glock. It also features a sear separate from the trigger bar, which holds the striker in a cocked position prior to release.

While this may have been considered to be a feature in the 1990s, modern training rarely emphasizes second-strike capability, in favor of racking the slide to remove the misfiring round to quickly get the pistol back into action instead of gambling that it will discharge on a second strike.

Charlie Gao studied Political and Computer Science at Grinnell College and is a frequent commentator on defense and national security issues. This first appeared earlier this year.