One of Russia's Most Powerful Bombers Could Get Hypersonic Weapons 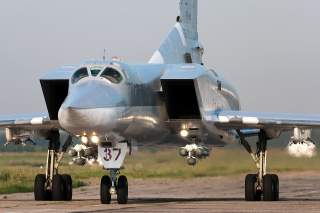 During the Cold War, one of the most feared Soviet weapons was the Tu-22M (NATO code name: Backfire) bomber.

Today, some of the most feared Russian weapons are the newly unveiled hypersonic missiles, which travel so fast that they can't be shot down by current Western defenses.

Russia is testing hypersonic missiles on the Backfire. More specifically, the KH-47M2 Kinzhal, a twenty-six-foot-long missile that is essentially an air-launched version of the SS-26 Iskander short-range, nuclear-capable ballistic missile. The Kinzhal appears to be aimed at penetrating U.S. missile defenses to destroy critical theater-level installations such as command centers, though it could also be used as an anti-ship missile.

The Kinzhal created a stir recently amid reports that the Soviets were testing the missile on MiG-31 fighters. Though the Kinzhal is a relatively large missile for a fighter to carry, the launch aircraft needs to accelerate to sufficient speed to launch the missile. Hence, the testing on the fast MiG-31, NATO code name Foxhound, and a cousin of the Cold War MiG-25 Foxbat.

Yet the larger Backfire, which is capable of supersonic speed, is perfectly suited for testing the Kinzhal, Mikhail Oparin, the former commander of Russia’s Long-Range Aviation command, told the TASS news agency.

“The tests are needed to see whether it [the bomber] will be capable of accelerating the missile and to get the results,” Oparin said. “For long-range aircraft pilots, the missile is of the tactical scope but at the same time it has clear advantages by its capabilities of breaching enemy anti-ballistic missile defenses.”

“I believe it is speed that matters,” Oparin added.

“The MiG-31 has higher supersonic speed than the Tu-22M3 but now that a possibility has emerged to test the missiles aboard a long-range plane, this has to be done.”

Hypersonic missiles, which travel at faster than Mach 5, are formidable enough as both nuclear strike weapons and as ship killers. But mounted on a supersonic, long-range bomber like the Backfire, the Kinzhal could very formidable.

A MiG-31 fighter can only carry missile, while a Backfire could certainly carry several. A MiG-31 has a combat range of about 500 to 1,000 miles, while the Backfire's is around 1,500 miles.

It should be noted that the Backfire was as much propaganda as weapon, due in part to Tom Clancy’s Red Storm Rising novel depicting hordes of Backfires overwhelming U.S. carriers with massed volleys of anti-ship missiles. Because it was capable of being refueled while airborne, and because it looked like a B-1 bomber, some U.S. intelligence agencies estimated the Tu-22M, launched from northern Siberian bases, could drop nuclear weapons on the continental United States (and thus became part of U.S.-Soviet strategic arms controls talks). However, while maritime strike was certainly a big part of the Tu-22’s portfolio, the Soviets apparently never trained with the Backfire in the strategic role.

Nonetheless, Clancy’s fictional vision may be coming closer to reality. Russia built some five hundred Backfires during the Cold War. But flying later this year will be a prototype of the Tu-22M3M, equipped with modern digital avionics and a new information management system similar to the upgraded Tu-160M strategic bomber, according to Jane’s.

“Under this deep upgrade, the aircraft will be fitted with digital radio-navigation equipment, a new communications suite, and an updated weapon control system,” a Russian industry official told Jane’s.

Assuming the Backfire does receive the Kinzhal, which reportedly has a range of about 1,200 miles, then Western navies would have a problem. As during the Cold War, the first line of defense would be to intercept the bombers well out of Kinzhal launch range. With a fast supersonic bomber like the Tu-22, and a long-range anti-ship missiles like the Kinzhal, and that task will be that much harder. Add in the speed of the Kinzhal, which may indeed travel so fast that it can't be intercepted by shipboard air defenses, and U.S. Navy carrier groups could be in trouble.

But then again, other than some limited bombing missions over Afghanistan, the Backfire was never really tested. Whether hypersonic missiles will also live up to their hype also remains to be seen.