This One Thing Could Make China An Aircraft Carrier Superpower 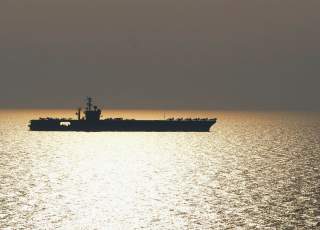 China currently has two aircraft carriers and is widely believed to be building at least one more.

Beijing appears to be eyeing a nuclear-powered aircraft carrier.

Defense News, which translated a copy of the statement, also quoted CSIC as saying “that these breakthroughs are required for China’s People’s Liberation Army Navy, or PLAN, to enhance its capability to globally operate in line with the service’s aim to become a networked, blue-water navy by 2025.”

According to the Global Times, a Chinese state-run tabloid-like outlet that reported that the statement “is the first time a State-owned Chinese defense company has openly identified nuclear-powered aircraft carriers on its agenda.” Global Times also notes that CSIC removed the sentence about the nuclear-powered aircraft carrier a day after it posted the statement. This is in line with China’s practice of keeping military technologies shrouded in secrecy for most of their development. Furthermore, Hu Wenming, the chairman of CSIC, said in a recent speech that China is capable of designing and building “any type” of aircraft carrier. Li Jie, a Beijing-based naval expert interviewed by the Global Times, said that “Hu's speech indicates that China can build aircraft carriers powered by diesel, gas or nuclear power.”

CSIC also built China’s first domestically-made aircraft carrier. That vessel was launched in August of last year and is currently undergoing testing before being commissioned into the People’s Liberation Army Navy (PLAN), which reports suggest could happen in 2020. The second aircraft carrier is slightly lighter than the Liaoning but otherwise is based on the same Soviet Kuznetsov-class design. Notably, like the Liaoning, it has a ski jump style deck that limits the kinds of airplanes that can operate from it. It is also powered by oil-fueled steam turbines.

Li Jie, the naval expert who spoke to the Global Times, suggested that China was taking a an incremental approach towards its carrier technology. "Each carrier achieves some breakthroughs," Li told the Global Times. “The second absorbed and consolidated technologies from the first one. The third carrier is able to use an electromagnetic aircraft launch system from the conventional ski-jump system. The fourth may witness breakthroughs in power units." Since the third carrier is reportedly already under construction, the fourth ship seems likely to have a nuclear power plant on board.

Still, there is little doubt that China will ultimately procure nuclear-powered aircraft carriers. As the CSIC statement noted, PLAN is determined to eventually field a blue-water navy. Nuclear-powered vessels have a greater endurance than their conventionally-powered counterparts, and therefore can operate across longer distances with less support. China’s current conventional carriers require frequent replenishments from ports and oversea bases. Although Beijing is steadily increasing the number of ports it can sail in, as well as building oversea bases, it ultimately does not want to be highly dependent of them. As Li, the naval expert, put it: “In the future, China's national interests will continue to expand overseas. Without a fleet of large nuclear-powered vessels, the Chinese navy cannot sail for a long time to faraway waters."

When China does finally build nuclear-powered aircraft carriers, some analysts—such as Collin Koh—have suggested that its sailors will benefit from already operating nuclear-powered submarines. This will reduce the amount of time it needs to spend on training crews to operate the new carriers. That being said, there will be some growing pains.

A history with nuclear-powered submarines should also help Chinese shipbuilders in designing a nuclear-powered carrier. Once again, however, the process isn’t entirely straightforward As Li pointed out, “France has showed that it’s not simply a matter of installing more reactors. It has to be redesigned and China has to overcome all the difficulties on its own.” Paris has built one nuclear-powered carrier—the Charles de Gaulle—but the ship has been plagued with numerous problems both during and after development. As Kyle Mizokami has noted, “Charles de Gaulle’s development was a long and painful process. Construction came to a halt on numerous occasions…. The carrier ended up being delivered to the French Navy three years late, and only started sea trials in 1999—twelve years after construction began.” Because of these issues, Paris ultimately decided against building a second carrier, as initially planned.

Besides France, only the United States currently has nuclear-powered aircraft carriers.