The One Thing That Will Decide the 2020 Election 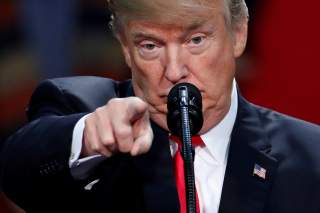 Purple states can swing either way and often end up deciding our elections. So, it’s worth asking what people in those states think about the issues dominating politics. Heritage Action for America, the sister organization of The Heritage Foundation, recently carried out a wide survey of Americans in five purple states, asking them about immigration, health care, political correctness, and much more. In this episode, our Editor-in-Chief Kate Trinko sits down with Nate Rogers from Heritage Action to unpack it all.

Kate Trinko: Joining us today is Nate Rogers, who is a senior adviser for political affairs at Heritage Action for America. Nate, thanks for joining us.

Nate, what were some of your biggest takeaways?

Rogers: This was a really interesting exercise. We entered it not looking to reach any conclusions that we had going in, we wanted to be very open in the polling process.

The first poll we conducted was a Republican-only poll so we wanted to see where conservatives and people who identify as Republican agree.

We know in the past there’s been a lot of divergence of opinions so we wanted to see exactly where opinion kind of combines from a policy perspective. So that was the first poll.

Then we did kind of a purple congressional district poll where we looked at the kind of places that could go either way and have a lot of diverse folks in those districts, [and we asked] them a similar set of questions.

A lot of the personalities and sort of tact of different characters in politics really kind of take over the agenda. We wanted to see what policies really bring Americans together and different groups of Americans. That was the endeavor and we have some interesting insights.

Trinko: Your poll also got into what Americans think about capitalism and socialism. Tell me about that.

We wanted to get beyond any of the semantic aspects of it, so we just put two statements to our survey respondents and we asked them, “Thinking about different forms of government, which of the following statements do you agree with most?”

The first statement we put out was, “Some people say that free-market capitalism is the best form of government because it gives people the freedom to work and achieve their potential. They say it’s not the government’s job to pick winners and losers and that government intervention only leads to inefficiency and abusive power.” That was one statement we put forward.

Then the other statement to choose from was, “Other people say that socialism is a more free and compassionate form of government. They say that corporations have too much control and that the capitalist system is set up to favor the rich and powerful. They say that the only way to police corporations and protect the citizens is for the government to take a larger role in managing the economy.”

We wanted to be as fair as possible in those two statements and really when describing socialism, we wanted to describe it in the glowing terms that the extreme left uses all the time.

This is really something that we’re really taking heart in is that the majority of Americans are still capitalists, which is great to see.

Trinko: There’s been a lot of talk about the left, it seems to have gotten much more aggressive in recent years, both on a rhetorical level but also in some of the policies: the Green New Deal, Rep. Rashida Tlaib recently called for a $20 an hour minimum wage, the House of course passed a $15 minimum wage. But a lot of it is just the rhetoric. The fight’s over almost culture war issues.

What did this polling of these purple states show about what people think about where the left is going?

Rogers: Yeah, the left is absolutely moving in an extreme direction, or at least most voters believe that.

We asked, basically, “Do you think that the left is pushing to a Democratic Party a bit too extreme?” And 50% responded in the affirmative compared to 45% that disagreed with that statement, and 43% strongly agreed. This was reflected across all the states we surveyed.

Really, the left is finding themselves in a difficult situation where a majority of their bases are really supporting policies that are just out of step and out of touch with the American people at large, or at least the voters we surveyed.

Trinko: I would say that during President Trump’s years in office, one of the biggest fights we’ve been having on a cultural level is political correctness, and yours was, I think, one of the first polls I’ve seen that actually asked people about that.

What did you find was the attitude in these purple states toward it?

Rogers: Yeah, this was a question that we first asked in our first survey surveying people who only identify as Republicans and we found that even among very conservative folks and folks who identify as more moderate, political correctness is a huge issue.

It’s something that a little over 70% of people who identify as Republicans said was a major problem and that was pretty striking to us.

As I mentioned earlier, we’re looking for ways for policies that will bring Americans together and it was very interesting that political correctness, which isn’t really a policy issue, really paints everything going on. So, taking that knowledge of how the country feels about political correctness is really important.

Trinko: What do you think should be food for thought for conservatives from the polling you’ve done?

Rogers: Basically, there are a lot of innovative policies that bring our country together, so we looked at different voters that had switched their votes in the past, we’ve looked at Americans from all different backgrounds, and there are a lot of interesting policies in the area of jobs, of the economy, of culture, that do bring everyone together with significant majorities.

I think in these polarizing times, a common thought and attitude that people have is we can’t agree on anything, and that’s simply not the case. We have found policies in a variety of different areas that really do tie everyone together.

Trinko: What are some of those policies?

Rogers: So, a great policy or a great area of policy that really everyone agrees with is the idea on what the future of education should be.

Starting this out, we asked folks about whether or not they believe that there are skilled labor jobs out there that don’t require you to go to college, don’t require you to take on student debt, and actually can end up paying you more than a job that you would have to go to college for would pay, and 72% of the people we surveyed agree with that, which is pretty impressive compared to only 21% that disagreed.