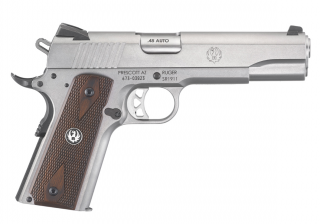 One of the most successful handgun designs of all time is the 1911 series semi-automatic pistol. Designed for war and to take advantage of the deadly .45 round, the 1911 and subsequent variants were the official handguns of the U.S. military from World War I well into the 1980s. The classic design, revered by many gun enthusiasts, is still sufficiently popular that most American gun manufacturers produce their own version. Sturm Ruger is no exception, the company’s SR1911 handgun a faithful rendition of what many consider gun designer John Moses Browning’s ultimate design.

In 1899 the U.S. Army was deployed to the Philippine islands. A recent colonial acquisition wrestled from Spain, the Army was sent to pacify Moro insurgents chafing under foreign rule. The war, which lasted for three years, saw American infantry engaged in close quarters jungle and village combat. The Army’s issue pistol, the Colt M1892 revolver chambered in .38 Long Colt was judged of insufficient power to stop a charging Moro tribesman, often requiring several shots to put the guerilla down. At times during the sometimes fierce, sometimes brutal hand-to-hand combat, there was time for only one shot.

After the insurrection ended in 1902 the Army took a hard look at upgrading its handguns. A new caliber, the bigger, more powerful .45 Automatic Colt Pistol (ACP) round was waiting in the wings. The new .45 ACP round was designed by prolific firearms inventor John Moses Browning and offered up to 50 percent more energy at the muzzle over .38 Long Colt, providing greater “stopping power” than ever before. Browning paired it with his brand new, thoroughly modern pistol design whose adoption promised to put the U.S. Army in the forefront of handheld small arms technology. The pistol, adopted in 1911 as the M1911, served throughout World War I. An updated version, the M1911A1, was adopted in the interwar years and remained standard issue among all the U.S. military services until it was replaced by the Beretta M9 handgun in 1985.

Browning’s patent on the 1911A1 expired decades ago, spawning easily more than a dozen contemporary imitators. Ruger’s SR1911 is typical of contemporary takes on John Browning’s masterpiece—conservative with few if any Ruger-specific design changes. The SR1911A1 handgun is a slab-sided, all steel firearm approximately 8.67 inches long, 5.45 inches high, and 1.34 inches wide. It weighs approximately 39 ounces unloaded and approximately 44.7 ounces with a loaded seven-round, single stack magazine flush with the pistol grip. The SR1911 also comes with an eight-round magazine that protrudes slightly from the grip, and with one round in the chamber can carry up to nine rounds.

The SR1911 features a 5-inch long barrel with a 1:16-inch right-hand twist to stabilize a 230-grain bullet. Like most handguns, the 1911A1’s effective range is short, typically 50 meters but depending in large part upon the shooter’s training and familiarity with the platform. Recoil is heavy but the gun’s reputation as a “hand cannon” is overstated—recoil is more of a firm push or shove than a violent jerk, making a .45 ACP handgun more manageable than handguns chambered for some lighter rounds.

The SR1911 includes a number of features that have come to be accepted in the highly conservative world of 1911 owners. The exposed hammer and trigger are both skeletonized for weight savings, and the gun has an oversized ejection port and extended magazine release. It features arguably the best sights for a 1911 series handgun, 3 dot adjustable Novak sights. Although traditionally blued or parkerized, Ruger’s 1911 is finished in satin stainless steel, completed with dark hardwood grip panels featuring the Ruger medallion.

The 1911 was one of the safest handguns at introduction in 1911 and arguably still is today. The SR1911 features a beavertail grip safety to prevent accidental discharge, and a manual safety means the pistol can be carried “cocked and locked,” with a round in the chamber, hammer cocked and safety on. A firm, quick push on the manual safety and the pistol is ready to fire. Finally, Ruger’s 1911 features a loaded chamber indicator, making press checks unnecessary.

More than a hundred years after introduction, the 1911 pistol design is still going strong, appealing to both traditionalists and new gun owners alike. Sturm Ruger’s take on the 1911 isn’t the first, and certainly won’t be the last, but it is a strong, robust handgun with Ruger’s reputation for reliability and affordability.