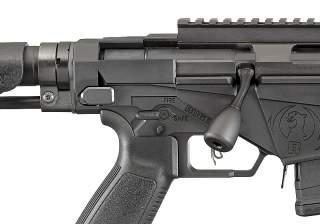 Key point: It's a good rifle not only for experts but beginners too.

Traditionally, the bar to becoming a quality, long-range precision shooter has been a high one. In order to shoot at exceptionally long ranges of 700 yards or more, an enthusiast has typically needed a relatively expensive, high-quality rifle. Companies such as Accuracy International made purpose-built precision rifles (also manufactured for military sniper use) or highly trained gunsmiths would take an unexceptional rifle, such as the Remington 700, and extensively customize it. The cost of such a rifle could easily range into the thousands of dollars—and that’s not even counting the cost of the scope.

In 2015, Sturm Ruger shook the precision rifle world with the introduction of the Ruger Precision Rifle. Founded shortly after World War II by William Ruger and Alexander McCormick, Ruger has concentrated on producing quality but relatively inexpensive firearms. Generally speaking, Ruger is to firearms what Ford is to the world of automobiles. Ruger has become known for such weapons as the Mini-14 semi-automatic rifle, the Hawkeye hunting rifle, and the GP100 double action revolver.

The Ruger Precision Rifle, or RPR, is based on the action of its budget Ruger American bolt action hunting rifle. The RPR uses the same three-lug bolt action, but that’s where the similarities end. The RPR has a cold hammer-forged chrome-moly steel barrel available in 20-, 22-, and 2- inch barrel lengths. The barrel is tipped off with the Ruger Hybrid Muzzle Brake, which minimizes barrel flash while at the same time mitigating noise and blast to the left and right of the shooter. Neighboring shooters who have been on the receiving end of muzzle brakes without blast mitigation in mind will appreciate the RPR’s reduced signature.

The base model Ruger Precision Rifle, in .308 Winchester, is 42.75” inches long with its stock extended, three inches wide, and 7.3 inches high. The rifle can fold its stock to the side, cutting length to an impressive 31.6 inches. The rifle weighs 9.8 pounds, and with a suitable scope and bipod will probably weigh just under thirteen pounds.

The RPR was first released in .308 Winchester, one of the most common precision shooting calibers, followed by 6.5 Creedmoor. Ruger has recently expanded its lineup to include even longer range calibers including 6mm Creedmoor, .300 Winchester Magnum, and the largest of all, .338 Lapua Magnum. Each rifle comes with two ten-round Magpul magazines. In order to tempt existing precision shooters who might be curious what the buzz is all about, Ruger made the RPR capable of accepting industry standard Accuracy International magazines.

The RPR is clearly meant to appeal to members of the AR-15 sporting gun crowd interested in getting into precision shooting. The rifle is externally similar to an AR platform weapon, with an aluminum handguard equipped with the M-LOK fastening system. A full-length Picatinny rail runs along the top of the upper receiver for attaching a rifle scope, with a twenty minute of angle rise adjustment already built in to bullet drop at long ranges.

Other friendly features include a pistol grip that can be replaced with literally one of dozens of AR-15 compatible pistol grips. The stock is attached to an AR-style buffer tube (although the bolt action design does not use a buffer and buffer spring) allowing the shooter to attach, different types of AR-compatible stocks. Nevertheless, the existing stock is very well thought out, with an adjustable length of pull ranging from 12” to 15.5” and an adjustable cheek riser.

The real test of the RPR is accuracy. First, a note on measurement: a key metric in the world of rifle accuracy is minute of angle, or MOA, is 1.047 inches at 100 yards. Rifles are typically fired and their groups measured based on how large—or small—a circle that can fit all the bullet holes inside is. The U.S. Army considers a rifle capable of placing a grouping of shots within a 1.047 inch circle, or 1 MOA, a sniper rifle.

According to most reviews, the Ruger Precision Rifle is capable of “sub-MOA” performance, but accuracy varies depending on the type of ammunition used. The extremely well-regarded Precision Rifle Blog achieved .91 MOA accuracy with Hornady A-MAX ammunition, with accuracy just over 1 MOA with match and hand-loaded ammunition. Likewise, Rifle Shooter Magazine achieved .6 MOA with Hornady A-MAX but just above 1 MOA with Hornady Superperformance SST. Sniper Central shot much better groups with Winchester and Hornady match ammunition, ranging from .5 MOA to .88 MOA.

Ruger has been able to develop a sub-MOA rifle at an extremely affordable price. With a list price of $1,599 and street prices considerably lower than that, the RPR is an economical way to get into the precision rifle hobby. The rifle’s low cost makes it an attractive rifle not only for first-time long-distance shooters but also a compelling choice for those already in the hobby. Paired with an optic and match ammunition, the Ruger Precision Rifle is difficult to beat.

Kyle Mizokami is a writer based in San Francisco who has appeared in The Diplomat, Foreign Policy, War is Boring and The Daily Beast. In 2009 he co-founded the defense and security blog Japan Security Watch. This piece was originally featured in November 2019 and is being republished due to reader's interest.