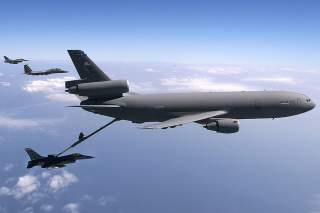 Shortly after the incident, the USAF ordered checks of all KC-10s and found a dozen similar leaks.

The aircraft, KC-10 tanker tail number 82-0190, known through most of its career as “Lady Luck,” was often in the public eye as a flying ambassador and goodwill vehicle. So much so, in fact, that in January 1987 then-Secretary of the Air Force Pete Aldridge helped rename it as “Rollin’ Out the Red,” with sporty new nose art.

As reported by Shreveport Times, the airplane lost whatever luck it had just a few months later, on Sep. 17, 1987, when it exploded on the Barksdale ramp while undergoing routine maintenance after a mission. Three airmen were on the airplane when it turned into a pillar of smoke and flame. Two escaped, miraculously, but one airman, Sgt. Joseph Burgio — a former Olympic wrestling hopeful and two-time New York state wrestling champ who volunteered as a coach at Parkway High School — died.

Burgio, married and the father of a young son, had previously served at Sprangdahlem Air Base, Germany, and one year prior to his death had earned the 2nd Consolidated Aircraft Maintenance Squadron and 2nd Bomb Wing Maintenance Technician of the Month awards.

It could have been much worse. Just two hours before, the plane had arrived with 17 people on board. When it exploded, it still had 63,000 pounds of fuel on board. The explosion destroyed the entire center section of the airplane, leaving only the tail intact and severing and dropping the cockpit to the ramp, according to an online report.

“One day, General Jack Chain, (commander in chief of Strategic Air Command) visited and spent much of the day with the 8the Air Force commander,” he wrote. “A subsequently confirmed design flaw caused a massive fire aboard one of our KC-10s, which had just completed an afternoon mission. One man, Sgt. Joey Burgio, died of smoke inhalation and the aircraft burned to the ground with the four-star and three-star watching the whole thing. … Some really talented people came together to perform incredibly under tough circumstances.”

“I remember that sad day on the KBAD ramp like it was yesterday,” he said. “I was in our squadron, the 32nd Air Refueling Squadron, and was downstairs when I just happened to look out on the ramp. I saw this big flame come up … I looked and saw the fire coming up. That was the first explosion.”

With other squadron personnel, they ran out onto the ramp and drove out to the stricken airplane as a second explosion took place. Flight engineers such as Moon and pilots were told to start the engines of other KC-10s parked wingtip to wingtip and fore and aft of the burning airplane to taxi them out of danger.

Moon saw his friend taken from the charred KC-10 and knew that Burgio was gone.

“He suffered from massive smoke inhalation, but he wasn’t burned at all,” Moon recalled.

“Burgio was just a super nice guy,” he said. “You wouldn’t meet a nicer person.”

The cause of the incident was attributed to a fuel vapor explosion in the center fuel tank.

Investigators found that fuel had leaked, and vapors probably had been ignited by arcing from a battery near the pump area for the tank.

Shortly after the incident, the USAF ordered checks of all KC-10s and found a dozen similar leaks.