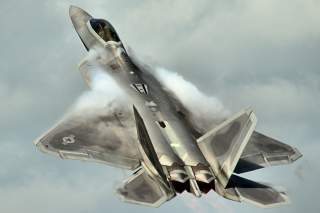 In August 2018, the Nikkei Asian Review detailed aspects of a proposal by Lockheed Martin to partner with Japanese companies to produce a new model of the F-22 Raptor, the world’s most capable air-superiority fighter jet. The stealth fighter would be upgraded with avionics and radar-absorbent material technologies developed for the newer, more affordable F-35 Lightning.

Japan is license-building forty-two F-35s but is not entirely satisfied with the multi-role jet, which was designed to penetrate enemy air defenses. By contrast, the Japanese Air Self Defense Force is foremost concerned with patrolling the skies around the far-flung Japanese islands against intrusion by Russian or Chinese warplanes and missiles. Though the F-35’s stealth characteristics have allowed it to heavily out-perform non-stealth jets in mock air battles, it’s still not as optimized for air-to-air combat as the Raptor, particularly for Within-Visual Range engagements.

Tokyo sought to procure Raptors back in the 2000s but was frustrated by a quasi-ban imposed by Congress in 1997 on exporting F-22s. Worse, the Raptor production line was closed in 2011, making it impractically expensive to order more of them.

For this reason, Tokyo spent $360 million developing its own stealth fighter demonstrator, the X-2 Shinshin, detailed in this article. In theory, the X-2 was to be evolved into an even more advanced sixth-generation fighter designated the Mitsubishi F-3. However, the defense ministry had an attack of the jitters in 2017 when they saw the projected $40 billion dollars necessary to home develop a stealth fighter—and that’s not counting procurement!

This was why in early 2018 word got out that Tokyo was looking for foreign partners to help it build the F-3, rather than relying exclusively on a domestic design. One idea that stood out was making a hybrid of the F-22 airframe and engines with the F-35’s vastly more sophisticated avionics. Substantial upgrades would be necessary as the 90’s-era F-22 has dated computer systems and needs to be regularly anointed with costly radar absorbent coatings before each mission.

According to the Nikkei Asian Review, the proposal is for an F-22 with strengthened wings and greater fuel capacity, extending range to over 1,350 miles. (For an inexact comparison, the F-22A’s combat radius without extra fuel tanks is listed as 530 miles.) Furthermore, the new Raptor would use the F-35’s modular panels of Radar Absorbent Materials rather than the F-22’s more expensive RAM coatings. Finally, the proposed Raptor would use the F-35’s vastly superior computer, which among myriad benefits, is designed to network sensor data with friendly forces to an unprecedented degree, transforming the stealth jet into a potent force multiplier.

To sweeten the deal, Lockheed is proposing that Japanese firms produce more than 50 to 60% of the components—specifically, the wings, electronics and possibly the engines. Japanese firm IHI has already developed a lightweight X9F-1 vector-thrust turbofan engine that can produce 33,000 pounds of thrust, modeled on the Raptor’s F119 turbofans.

Presumably, the aircraft would also be tailored to use Japanese avionics and weapons such as advanced new XASM-3 anti-ship and AAM-4B anti-aircraft missiles. However, the fuselage, computer, and radar absorbent panels would remain U.S.-manufactured.

This seems like exactly the air-superiority fighter the JASDF would love to acquire—except for bill proposed by Lockheed: the equivalent of $215 million per airplane for an order of seventy Japanese Raptors, scaling down to $188 million if the order increases to 140.

This staggering price point is remarkably in line with a leaked USAF evaluation forecasting a unit price of $206-216 million per plane if Raptor production were reopened. To put this in perspective, USAF F-22As were originally procured for $137 to 150 million each ($179 million 2018 dollars), and advanced 4.5-generation fighters are being exported for $70 to $100 million. Japan’s domestically assembled F-35As, which cost a third more than those built elsewhere, are clocking in at a higher-than-expected price of around $130 million (15 billion yen).

The offer may also not appeal to Tokyo because it seems unlikely that the most critical bits of technology—the RAM panels and computer systems—would be transferred to Japan. That would mean Japanese companies could fall even further behind in future efforts to develop domestic stealth fighters. At the same time, the Japanese Raptors would have to somehow circumvent the 1997 Obey Amendment, which specifically forbids any U.S. domestic funding going to an F-22 export variant, as well as the zero-sum trade warfare perspective of the Trump administration.

Though several sources claim the F-22/F-35 hybrid is a frontrunner for the F-3 program, The National Interest’s Dave Majumdar argues that the above problems likely mean Lockheed’s proposal is doomed.

However, it’s important to remember that Tokyo has also submitted Requests For Information to other companies including Boeing, Northrop Grumman and BAE. Some sources allege Boeing is proposing upgraded F-15s—which could imply a low-observable Silent Eagle-style design, or cooperation on the U.S. Navy’s next-generation F-A-XX project. Grumman, which devised the Raptor’s unsuccessful rival, the YF-23, has also talked up its interest in the F-3 project, though publicly available details are scant.

Japan has also reportedly consulted with the UK’s BAE regarding its sixth-generation Tempest stealth fighter project. While a Japanese-British plane would be a longshot, this possibility hi-lights that Japan originally planned the F-3 to be a generation ahead of the F-22 and F-35.

The JSDF may be worried by its experience with the Mitsubishi F-2 single-engine fighter—basically a heavily upgraded F-16 built 60 percent domestically at four times the price ($127 million per plane!) The result was more expensive and less capable than Japan’s twin-engine F-15Js and will need replacing by 2030. To add insult to injury, a fifth of the F-2 fleet was damaged or destroyed by a tsunami wave in 2011.

If an obscene amount of money must be spent on a new stealth jet, Tokyo might prefer for that plane to represent a genuine technological breakthrough, rather than a refinement of an earlier fifth-generation design that may no longer be in its prime by the time it enters service.

On the other hand, the F-2 story also illustrates Japan’s willingness to pay premium prices for bespoke, locally-assembled weapon systems. In theory, Tokyo will decide which direction it will pursue for its air-superiority stealth fighters by the end of 2018—an accelerated schedule necessitated by the imminent pasturing of its venerable F-4EJ Phantom jets and eventual retirement of the F-2.