The Only Way to Stop Bernie Sanders 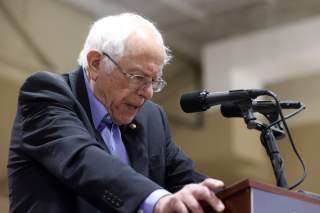 At the South Carolina debate, Sanders defended himself for having pointed out the few policy successes of socialist and communist dictatorships. “That is different than saying that governments occasionally do things that are good,” he said.

Hundreds of millions of people have been allowed to rise out of poverty in China, since Reform & Opening, and the literacy rate did increase in Cuba. Joe Biden and Pete Buttigieg, competing to stop Sanders and grab ahold of the “moderate” mantle, continued to hit the self-proclaimed “socialist,” suggesting that he is soft on left-wing human rights abusers.

Sanders was right, however, on the essential factual points he made. His opponents attacked him instead on the optics. “This is not about what coups were happening in the 1970s or '80s, this is about the future,” Buttigieg said. (Similarly, no one disputed his claims that the Soviet Union’s Moscow had a properly functioning subway system. And if you think public transportation isn’t important, ask people how they get to work if they live 21 miles away and there are no buses running.)

But the moderate Democrats missed a key opportunity to hit him on how Marxist socialism failed in the countries he was referencing, particularly China. His claim that China lifted hundreds of millions out of poverty only applies starting after 1978, when Deng Xiaoping took over as leader and began the series of reforms that would push China in a more free-market-oriented direction. If anything, rather than attempting to dismiss the point, emphasizing the success of China’s post-1978 economy could point to the success of the market economy.

China reversed its communization of farmland. Farmers, individually managing plots of land under post-Mao reforms, were able to keep their surplus, incentivizing them to produce more efficiently. During the old communist era, everyone was supposed to work the same land, eat in the canteen, and eat similar meals no matter how productive they had been. Naturally, most people didn’t work hard.

Although there were some efforts to grade people’s effort, trying to grade work would have been very difficult even if it were done without bias, which it was not. (Marx advocated for the idea of labor vouchers in his Critique of the Gotha Programme, and the Soviet Union and People’s Republic of China both had “to each according to his contribution” written into their original constitutions.)

Meanwhile, Bernie Sanders advocates “a federal jobs guarantee” to guarantee “everyone” a “stable job that pays a living wage.” That is going in the direction of China’s failed “iron rice bowl” and in the opposite direction from its successful anti-poverty program. It would be enormously expensive and likely inefficient.

If someone did want to draw a comparison between Sanders and socialism, they could start there. However, if you look at the rest of his agenda, he does not advocate taking over businesses. He does not advocate nationalizing oil or creating a dictatorship of the proletariat. (Trump’s plan to “take the oil” is actually more communist in some ways than Bernie’s plans.)

In fact, the countries Bernie always cites as models for his agenda—Sweden, Norway, Denmark, etc—are all prosperous capitalist countries. The UK and Canada, with their socialized healthcare systems, are actually more economically free than the U.S., according to the Heritage Foundation’s Index of Economic Freedom.

So Sanders really isn’t much of a socialist. His positions are very close to those of Elizabeth Warren, who explicitly calls herself a capitalist. Sanders, too, advocates for maintaining a capitalist system—just reforming it. That is what Marx derisively called “bourgeois socialism.”

The great social welfare states of Scandinavia Sanders lauds are only possible because they have dynamic economies, built on market capitalism, which create the wealth necessary to afford generous benefits.

If we (and this includes Sanders himself) must insist that Sanders is a “socialist,” then we have to admit that this kind of “socialism” is not inconsistent with capitalism. People from left-wing and right-wing persuasion have tried for too long to simplistically define policies into one of the two boxes.

Now the progressive left, including Sanders, has been trying to appropriate “socialism,” by calling Medicare, Social Security, and FDR’s New Deal programs “socialist.” Inadvertently, they adopt the language of the John Birch Society and the Tea Party.

What has happened is that after social welfare programs have been called “socialist” for so long, the term has lost or redefined its meaning. If Obamacare is going to be smeared as “socialism,” and if any proposal to expand social welfare or provide greater protections to consumers and workers is going to be so vilified, then young left-leaning kids think, “Maybe socialism isn’t so bad.”

It is dangerous if one wants to prevent actual leftist policies and even revolution, to constantly block all proposed reforms of the “bourgeois” system at a time when income inequality is perceived as being at historic levels, when even the Republican Party felt a need to emphasize the plight of the working class in the 2016 election. If grievances go unaddressed and people begin to lose faith in the democratic system, then they might look elsewhere.

Now we get back to what Sanders said about Cuba and Communist China. Well, maybe if dictator Batista didn’t abuse the Cuban people so much, neglect their educations, and pay more attention to serving the United States’ interests than that of his country, then there would not have been so much motivation among the Cuban people to get rid of him?

China, during the Kuomintang reign, was relatively impoverished, if growing in spurts, but what growth did come did not find its way to the peasants, who were largely abused under the “semi-feudal” system in which landlords ran politics at the local levels. Some landlords were better than others. Others would sell the children of debtors into slavery. But even with the nicest landlord, the system itself was such that peasants were still bound to the land. It is not surprising at all that the peasants embraced revolutionaries who promised to liberate them and redistribute the land.

Chiang Kai-shek and the Kuomintang had not succeeded, lacking the capacity and the will, to do land reform on mainland China, sealing their fates. Then when Chiang Kai-shek fled to Taiwan, he did redistribute the land.

The U.S., during its administration of post-WWII South Korea, began the process of land reform. Right-wing authoritarian Park Geun-hye, staring down communism in the North, established national healthcare. It was not just because they thought it was the right policy, which they did, but also because they did not want to create the conditions that would bring about communism.

Now if the Democratic moderates and the moderate Republicans who fear Sanders more than Trump do not want something worse than Sanders to come about in the future, they must do more than dismiss everything. They must address the grievances that led to Sanders.