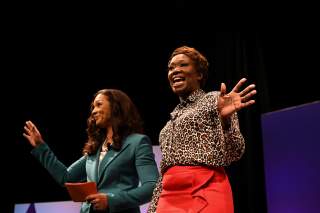 “I want to make a quick correction. This is a pretty big correction,” Reid said on “AM Joy” after a segment discussing Defense Secretary Mark Esper’s move to fire former Navy Secretary Richard Spencer in November over a disagreement he had with President Donald Trump.

CORRECTION: Earlier on #AMJoy as we were talking about former Navy secretary Richard Spencer we mistakenly showed the wrong image of white supremacist Richard Spencer. We are very, deeply sorry for that mistake. pic.twitter.com/l3QW2lNP0b

Spencer’s job was terminated after he and Trump disagreed over whether embattled Navy SEAL Eddie Gallagher should face disciplinary action from the Navy — and the potential loss of his Trident — following Gallagher’s court martial.

Spencer mentioned in his termination letter that he disagreed with the president on what constitutes the “key principle of good order and discipline,” noting that he could not “in good conscience” obey Trump’s order to excuse Gallagher.

Spencer, the white supremacist, meanwhile, is known for orchestrating a Unite the Right rally in 2017 that culminated in a riot and numerous injuries, including one death. He was a featured speaker at the Charlottesville, Virginia, rally.