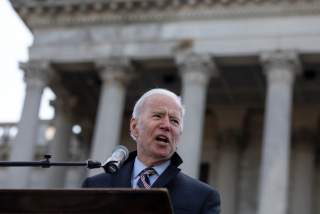 The campaign released the video, narrated by rapid response director Andrew Bates, in order to push back on Trump allies’ allegations that Biden pressured the Ukrainian government in 2016 to fire prosecutor Viktor Shokin in order to shut down an investigation of Burisma, where Hunter Biden was a director.

The video quoted Daria Kaleniuk, an activist with the Anti-Corruption Action Centre, criticizing Shokin as maintaining a “Soviet system of prosecution which intimidates people.”

But the Biden campaign appears to have overlooked another target of Kaleniuk’s scrutiny.

“I think Hunter Biden did a very bad thing and he was very wrong. He allowed his name to be abused,” she told ABC News in an interview that aired June 20, 2019.

Burisma reportedly paid Hunter Biden over $80,000 per month beginning in 2014, the same year Joe Biden took over as the Obama administration’s chief liaison to Ukraine.

Democrats have disputed that Shokin was investigating Burisma when he was fired, or that Biden was aware of any plans to probe the gas company. But officials in Ukraine and the United Kingdom have at various points investigated Burisma’s owner, Mykola Zlochevsky.

State Department officials were also aware of Burisma’s reputation for corruption even while Biden was linked to the firm.

George Kent, who serves as deputy assistant secretary of state for Eurasian and European affairs, told Congress during the Trump impeachment hearings Oct. 15, 2019, that he raised concerns in 2016 with the U.S. Agency for International Development over an event that was scheduled to be held with Burisma.

Biden has also denied that he was warned while serving as vice president of potential conflicts of interest due to his son’s board position.

Take a seat, grab yourself a drink, and listen to our campaign’s Rapid Response Director @AndrewBatesNC explain what really happened in Ukraine. #TeamJoe pic.twitter.com/y82fcTGNvK

The denial conflicts with what at least one former Obama administration official told The New Yorker in a profile of Hunter Biden published in 2019.

Amos Hochstein, who served as special envoy for energy in the Obama administration, told the magazine that he flagged potential problems with Hunter Biden’s work to Burisma with Joe Biden in December 2015.

The Biden campaign did not immediately respond to a request for comment.