Out With the Old, in with the New: The Marine Corps Is Getting an Amphibious Makeover. 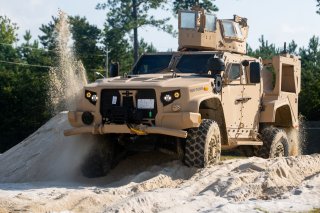 As America extricates itself from decades of war in the Middle East, the United States Marine Corps (USMC) is shifting as well, transforming itself from a second army optimized for grinding land campaigns in the Middle East to a leaner, lighter force, much more attuned to its amphibious heritage.

As part of that transition back to an amphibious assault force, the Marines’ new unofficial mantra is, if it doesn’t swim, it sinks. And with an eye on China and the Indo-Pacific, they’ve gotten rid of a tremendous amount of equipment.

It is part of a reinvestment strategy that seeks to put more dollars into better equipment for the Marine warfighter. “We must first divest of legacy programs in order to generate the resources needed to invest in future capabilities,” the Corps’ top Marine, Commandant of the Marine Corps Gen. David Berger explains in the Force Design 2030 document that outlines the Corps’ future.

In 2020 the United States Marine Corps divested an incredible amount of equipment—fully 5,500 items valued at nearly $500 million. Much was given away, everything from M1 Abrams main battle tanks to counter mobility equipment to systems for fuel and water.

The Marine Corps armor, in particular, has been a hard pill to swallow, especially for USMC tankers. Before divestment, the USMC had about 450 tanks spread across Corps tank battalions. Today, there are around fifty left. The Marine’s tanks and other armor heads to the U.S. Army.

In the meantime, the Corps is becoming smaller overall with fewer Marines in uniform than in decades past. But they are also acquiring newer equipment, including a ship-sinking remote control JLTV, a new ship to ferry decentralized groups of Marines around the Pacific, as well as newer and better protective equipment and more mundane fuel and water systems.

In order to pivot from the Middle East to the Indo-Pacific, the Marine Corps must divest some equipment that wouldn’t hold up—or swim—in the Pacific, painful though it may be. Still, as old legacy systems go out, new ones come in, hopefully putting fresh wind into Marine Corps’ sails.