Out of Thin Air: The Air Force Plan for Synthesizing Jet Fuel 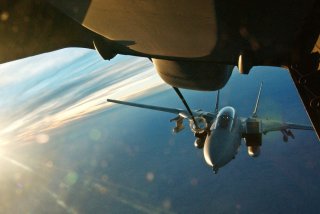 A recent U.S. Air Force (USAF) initiative poses the question, “what if you could access fuel from anywhere on the planet, at any time, no tanker required?” Well, it seems that the flying branch thinks it can synthesize jet fuel from the air.

Last year, the Air Force partnered with a company, Twelve, to further develop the company’s fuel synthesis technology. The company manufactures a variety of chemicals from carbon dioxide—including jet fuel.

“Initial testing shows that the system is highly deployable and scalable, enabling the warfighter to access synthetic fuel from anywhere in the world.,” an Air Force statement on the synthetic fuel initiative reads. “Reliable access to energy and fuel is paramount to military operations. Recent joint wargaming and operational exercises have underlined the significant risk that transporting, storing, and delivering fuel poses to troops—both at home and abroad.”

Citing the high casualty costs accrued by water and fuel convoys in Afghanistan—approximately thirty percent of the conflict’s losses—the potential benefits of an organic fuel generation capability to logistics and personnel losses are significant.

Currently, “the Department of the Air Force relies on commercial fuel to operate, both domestically and abroad. The Air Force must use a combination of trucks, aircraft, and ships to ensure fuel is delivered to meet warfighter demand.” But supply chains can be challenging to maintain, particularly in remote and austere theaters. Generating fuel from the air could reduce or eliminate the Air Force’s reliance on fuel supply chains.

Most synthetic fuels are made by heating or burning an unrefined fuel like biomass, natural gas, or coal and processing it into a more refined fuel in a process known as Fischer-Tropsch Synthesis. World War II-era Nazi Germany and Apartheid-era South Africa used similar synthesis methods, cutting their relatively small fuel supplies with FT-synthesized fuel to stretch fuel supplies and meet their petroleum needs.

Currently, the Air Force allows USAF aircraft to run on a 50-50 Fischer-Tropsch/petroleum fuel blend. However, the Air Force notes that broader scaling of the technology can significantly reduce dependence on traditionally refined oil and decrease if not eliminate fuel supply chain vulnerabilities.

The Air Force notes that “there remain a number of unanswered questions to make this technology operational.” Two of the big unanswered questions are where to get the power necessary to synthesize fuel and where to source water required to generate hydrogen for the synthesization process. Still, fuel synthesis could be a substantial logistical boon for the United States military for locations close to the water—like, in the Pacific.