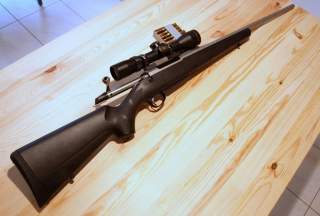 Key Point: The T3x has better iron-sites than any rifle on the market today.

While bolt action rifles have been supplanted in most roles by semi-automatics, they remain solid choices for people who just want a light rifle for self-defense against predators and hunting. Also, as scopes have become more popular and durable, the traditional iron-sighted bolt action rifle is falling out of favor. However, iron sights will always be lighter and lower profile than scopes, qualities that may prove attractive to an outdoorsman who doesn’t need the additional magnification and precision a scope brings.

One rifle stands out as the premier choice for someone looking for a traditional, iron-sighted rifle, the Tikka T3x Arctic. This rifle adopted by the Canadian Rangers as the C19. The Rangers used the venerable Lee Enfield No. 4 in various subvariants before the C19, but by the 2010s the rifles were in a serious state of disrepair. Most bores were almost completely shot out, resulting in poor accuracy.

But what makes the T3x such a good replacement? A lot of it comes from the heritage of the rifles. While the “Tikka” brand name originally belonged to Oy Tikkakoski Ab, the Tikka T3x is manufactured by Sako Oy, which merged with Tikkakoski in the 1980s. Sako has been known for accurate rifles since the 1920s when they were produced accurized versions of the Soviet Mosin rifle.

While not all Finnish Mosins were made by Sako (some were also made by Tikkakoski and other arsenals), almost all Finnish Mosins are known for their accuracy. Compared to their Russian counterparts, they feature better barrels and a “tuned” stock to receiver fit.

Sako would switch to producing accurate hunting rifles after the Continuation War. Through the Cold War, they would make hunting rifles, but none of these would see military service. The Finnish Defense Forces (FDF) continued to use accurized mosins, even producing a special version in the mid-1980s: the TKIV 85. The TKIV was not made by Sako, but rather Valmet Oy and various FDF arsenals.

However, in the late 1980s and early 1990s, Sako developed the TRG series of sniper rifles which proved wildly popular on the international market. They also replaced the TKIV in FDF service. Sako also released the Sako 85, the latest iteration of its hunting rifle line around this time. The “Tikka” brand was also relaunched as a cheaper alternative to the mainstay Sako line, featuring the same accuracy but in a more affordable package that was easier to manufacture.

By 2015, Sako had all the cards to win the competition for a new Canadian Ranger rifle when it began. They had experience building durable wood stocks via their lines of hunting rifles. They had experience working on military contracts and building to government specification via the Sako TRG line. But perhaps most importantly, while most sniper rifles had foregone iron sights, Sako continued to produce a line of excellent “emergency” iron sights for their TRG series of rifles.

Compare the front sight on a C19, and an emergency front sight of a TRG and the heritage is clear. Both clamp on to the barrel and use a robust, AK-style height adjustment and interrupted circle sight picture. Tikka would go on to make some small modifications, such as enlarging the trigger guard and enlarging the bolt handle for use with gloves, but the basic Tikka T3 CTR design won the contract. Tikka being the “cheaper” Sako brand probably helped them win the contact on bidding price too, as the tooling was already in place to mass produce most components of the C19.

Altogether, the C19 represents perhaps the best iron-sighted outdoors rifle there is today. It has smart design features for operation in adverse conditions and accuracy borne out of a long tradition of design. By most accounts, Canadian Rangers are satisfied with their new rifle. The most common complaint is that it is not “semi-auto.” But one would be hard pressed to find a semi-auto as light, reliable, and handy as the C19.

Charlie Gao studied Political and Computer Science at Grinnell College and is a frequent commentator on defense and national security issues. This piece was first featured in September 2019 and is being republished due to reader's interest.