Over a Year Ago, America, Japan and South Korea Held a Joint-Missile Defense Drill 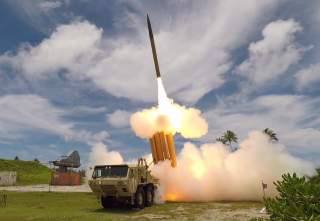 THAAD, already placed in Guam by the U.S. military, is a terminal phase interceptor missile designed to knock incoming enemy missiles out of the sky as they approach their target.

The US, Japan and South Korea are planning a joint, two-day ballistic missile defense exercise in Pacific waters as a show of resolve and defensive technical competence in light of North Korean attack threats.

The drills will be held in waters off the coast of Japan on Monday and Tuesday, Defense Minister Itsunori Onodera said during a visit to a garrison in northern Japan, German news outlet Deutsche Welle reported.

The exercise comes following a  U.S. Missile Defense Agency and U.S. Army successful missile defense test using the Terminal High Altitude Area Defense (THAAD) system.  The test, and joint exercises are, at least in part, aimed at further assessing possible upgrades to THAAD enabling it to intercept longer-range ballistic missile attack. Lockheed has long been developing an "extended range" THAAD, called THAAD-ER, engineered to extend the weapon's intercept range out to at least 150 kilometers. Such a technology, if implemented, could be of great consequence regarding an ability to counter medium and long range North Korean ballistic missile attacks.

During a previous test over this past summer, a medium-range target ballistic missile (MRBM) was air-launched by a U.S. Air Force C-17 over the Pacific Ocean. The THAAD weapon system located at Pacific Spaceport Complex Alaska in Kodiak, Alaska, detected, tracked and intercepted the target.

The test, designated Flight Experiment THAAD (FET)-01, was conducted to gather threat data from a THAAD interceptor in flight.

“In addition to successfully intercepting the target, the data collected will allow MDA to enhance the THAAD weapon system, our modeling and simulation capabilities, and our ability to stay ahead of the evolving threat,” MDA Director Lt. Gen. Sam Greaves said in a written statement.

Analysts have said that it is not clear whether North Korea has the technology to accurately launch a nuclear-armed ICBM able to successfully travel throughout all three phases of flight toward a target. An ICBM needs to travel through space carrying a warhead and then successfully re-enter the earth’s atmosphere before hitting its target

This recent THAAD intercept unquestionably pertains to fast-mounting tensions between the US and North Korea because, in the event of a military confrontation, many suspect North Korea will fire a barrage of conventional ballistic missiles into neighboring South Korea. Naturally, this prospect creates a very serious threat to US military personnel and civilians throughout northern South Korea, especially areas in and around the South Korean capital of Seoul.

While THAAD is not believed to have the technology to knock out an attacking ICBM, especially in the midcourse phase as an attacking nuclear missile travels through space, the weapon has consistently proven itself as part of a substantial US Missile Defense layered defensive apparatus designed to destroy both ICBMs and medium range ballistic missiles.

THAADs "terminal" phase missile defense technology is aimed at using radar to locate and then destroy attacking missile threats, however an Aug. 8 report from CNN says South Korea has suspended further THAAD deployments in part, it appears, due to Chinese opposition to the deployment. Chinese officials, according to a report in The Diplomat, have vigorously protested South Korea's deployment of THAAD, in part because it is believed that THAAD has an AN/TPY-2 radar able to degrade Chinese military missile capability by detecting potential launches. However, despite the presence of THAAD in South Korea and Guam, it is not clear that enough of the batteries have been deployed such that it could succeed in thwarting a massive, multi-missile attack designed to blanket the area.

Recent threats, provocations and elevated language have again raised the question in the minds of many as to whether US missile defense Ground-Based interceptors would succeed in knocking a North Korean-launched ICBM out of the sky. A successful test within recent months has raised US confidence. A Missile Defense Agency Exoatmospheric Kill Vehicle (EKV) , a kinetic-force weapon that slams into its targets, has destroyed an ICBM for the first time during a Missile Defense Agency test of the Ground-based Midcourse Defense system.

The Missile Defense Agency's first-ever successful intercept of an ICBM target using a Ground-based Midcourse Defense system, using the kinetic force of an EKV to destroy the target, is paving the way toward advanced future kill vehicles able to discern and attack multiple approaching threats, industry and Pentagon officials said.

The intercept, taking place over the Pacific Ocean, used X-band radar to track the target while using a fire control solution to destroy the ICBM.

Although this language is not necessarily taken seriously as North Korea has made a habit out of making these kind of statements, Kim Jong-un is thought to be both unpredictable and potentially unstable. As a result, US planners are not taking any chances when it comes to stepping-up missile defense technology and preparedness.

Lt. Gen. David L. Mann, former US Army Space and Missile Defense Command told reporters last year that he did not know if North Korea’s claim about having successfully miniaturized a nuclear weapon is accurate, but did say their nuclear ambitions need to be taken seriously.

While many details about North Korea’s nuclear missile technology are likely not publically available, Mann may have likely been referring to the often-cited North Korea’s Taepodong 2 long-range missile. Various reports, such as one from the BBC, say this long-range weapon can hit ranges greater than 8,000 km – a distance which could put parts of the US at risk from a North Korean attack.

Also, Mann may have been referring to another North Korean missile which has also been in the public eye. The North Korean KN-08 missile, mentioned last year by Commander of US Northern Command Adm. William Gortney, can reach ranges greater than 3,400 miles, according to a report from the Associated Press.

At the same time, many analysts have said that it is not clear whether North Korea has the technology to accurately launch a nuclear-armed ICBM able to successfully travel throughout all three phases of flight toward a target. An ICBM needs to travel through space carrying a warhead and then successfully re-enter the earth’s atmosphere before hitting its target.

Defense Secretary Jim Mattis has addressed the escalating circumstance with North Korea, saying the regime's actions were moving in a "very reckless manner."

With these threats as part of the equation, the Pentagon has sent the Terminal High Altitude Area Defense, or THAAD, to South Korea as a way to better protect against North Korean missile threats. THAAD, already placed in Guam by the U.S. military, is a terminal phase interceptor missile designed to knock incoming enemy missiles out of the sky as they approach their target.