The P-47 Thunderbolt Was the Original Flying Tank 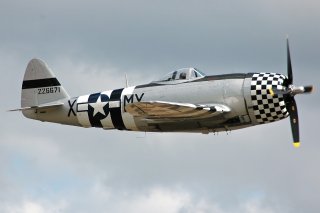 The Thunderbolt was heavy, powerful, and powerfully armed. It could also take a beating and limp back to base in one piece.

Compared to other contemporary fighters, the P-47 was a beast: it weighed nearly 10,000 pounds and had a large diameter, rather wide fuselage. One article colorfully described the plane after its early 1940 debut: “Powered by a 2,000-horsepower Ford-built 18-cylinder two-row Pratt & Whitney turbo-supercharged engine, swinging a 12-foot four-bladed Curtis-electric propeller, it can climb like a homesick angel; shoot like the devil with eight heavy-caliber machine guns, and fight at any altitude the pilot can endure.”

Not only was the P-47 a hefty fighter, but it was heavily armed as well. The fighter could fire not two—not four—but a total of 8 .50 caliber heavy machine guns mounted inside the plane’s wing simultaneously, making it a powerful air-to-air fighter. One general stated—rather shockingly—that the P-47’s 8 guns generated the same amount of impact as a 5-ton truck hitting a brick wall at 60 miles per hour. Incredible.

The P-47 was also remarkably robust. Accounts from the Second World War are replete with accounts of incredibly shot up P-47s not only managing to return to base despite extensive battle damage, but also quickly being repaired and airworthy. A fascinating overview of the P-47 in a 1941 edition of Popular Science can be read here and is well worth the read.

Upgrades to the airplane’s onboard fuel capacity as well as additional fuel provided by drop tanks saw the plane’s range steadily increase. Eventually, the P-47’s role morphed from purely fighter or bomber escort platform to a fighter-bomber. By attaching 1,000 pound bombs to the bottom of the plane’s fuselage as well as unguided rockets under the P-47’s wings, the airplane was more than capable of attacking ground targets rather effectively.

By some accounts, the P-47 was also the fastest diving American airplane of the war, which may have aided in engaging ground targets. One of the other qualities that substantially helped the P-47 sustain large amounts of damage was its air-cooled engine design, which did not depend on liquid coolant and was, therefore, less vulnerable to damage.

Today, the P-47’s legacy lives on in the Fairchild Republic A-10 Thunderbolt II, named in honor of the World War II fighter. Like its sturdy predecessor, the A-10 Thunderbolt also enjoys a reputation for extreme durability and ruggedness: Thanks to 1,200 pounds of titanium armor plating surrounding the pilot and cockpit, the A-10 is able to resist 23mm cannon projectiles as well as some fire from rounds as large as 57mm.