P-61 Black Widow: The Fighter That Made the Last Two 'Kills' of World War II 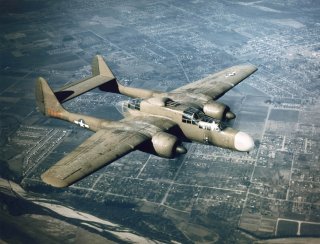 The Second World War saw a major leap forward in aircraft design. When the war began, the United States Army Air Corps and the Royal Air were each still flying outdated aircraft including the Douglas TBD-1 and Fairey Swordfish respectively. By the war's end, revolutionary jet aircraft such as the German Me-262 were just the beginning of the things to come.

But along the way, it wasn't just the aircraft that were advancing, but also how they were being used. World War II introduced new concepts of strategic bombing, and to counter it created a new category of aircraft. This was the night fighter or all-weather interceptor, which was a fighter adapted for use at night and in times of poor visibility. While the concept did date to the First World War, when some aircraft were modified to operate at night, it wasn't until the nighttime bombing raids over Europe's cities that military planners saw a need for a specially built aircraft.

The first operational U.S. warplane specifically designed as a night fighter was the Northrop P-61 Black Widow, named for the North American spider. It was also the first aircraft designed to use radar. The P-61 was an all-metal, twin-engine fighter with a twin-boom configuration that was similar in profile to the German Focke-Wulf Fw 189 Luftwaffe reconnaissance aircraft and, of course, the American Lockheed P-38.

The P-61 made its first test flight in May 1942 and it began to enter service in late 1943 where it was operated effectively as a night-fighter by the U.S. Army Air Forces and was used in the European Theater, Pacific Theater, China Burma India Theater, and Mediterranean Theater during the war.

Northrop Aircraft Corporation was actually just a year old—and primarily operating as a subcontractor for larger aircraft manufacturers—when it began to develop the P-61. The other, more established airplane builders, including Lockheed, Grumman and Douglas, were committed beyond their capacity and Northrop stepped up with its design. While not entirely radical or revolutionary it did break with the norms with its twin-boom design.

It featured a crew of three that included a pilot, gunner and radio operator. The P-61 was also well-armed for its night-fighter role, and included four .20 mm Hispano M2 cannons mounted in the lower fuselage, and four .50 caliber M2 Browning machine guns mounted in the dorsal gun turret.

The initial production models were fielded with a U.S. Army regulation olive drab/neutral gray paint scheme, but after testing a "Jet Black" paint on bare metal—rather than over existing paint —it was found that the plane could be nearly invisible to enemy ground-based searchlights. From February 1944 all the Black Widows were thus painted Jet Black, while those in the field were often repainted.

However, despite the innovative design and special paint, the P-61 played a minor role in the war. The aircraft was responsible for only downing 127 aircraft including 18 V-1 Buzz Bombs. Still, the aircraft has a mystique to it—possibly both from its name and appearance.

One particular P-61, Lady in the Dark, piloted by Captain Lee Kendall, was reportedly one of the most photographed Black Widows in the Pacific Theater, and also was the aircraft that scored the final two aerial "kills" of World War II. One was on the last night of the war, while another was almost 24 hours after the hostilities had officially ended. Kendall was able to down two Japanese aircraft, liking planning kamikaze attacks, by pursuing those enemies and without firing shot caused both to crash!

After the war, the P-61 was used in a joint effort by four U.S. government agencies including the U.S. Army Air Forces (the U.S. Air Force after 1947), the U.S. Navy, the U.S. Weather Bureau and the National Advisory Committee for Aeronautics (NACA), which later became NASA. The project was conducted to learn about thunderstorms and how to better protect military and civilian aircraft in the storms. Many of the theories and findings that stemmed from the project, including the stages in the life-cycle of a thunderstorm, became the cornerstone of today's understanding of thunderstorms and related weather phenomena.