The Pacific Is Massive, But That's No Problem for the Navy's Expeditionary Sea Base Ships 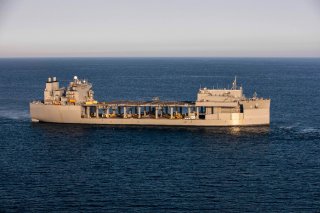 The U.S. Navy is taking decided measures to improve the mission versatility and lethality of its Expeditionary Sea Base (ESB) ships, a move intended to greatly fortify the services Pacific posture and readiness for maritime warfare.

The Navy has started construction on its fifth ESB, the future USS Robert E. Simanek, a ship intended to support forward operating aviation, deliver special operations, and at-sea command and control. The ship class has been modified in recent years to support an expanding sphere of combat missions, including greater support and logistical help for forward-deployed forces on the edge of combat.

The ESB class is being increasingly tailored for mobile “sea basing” for strategic reasons connected to the U.S. Navy’s growing Pacific emphasis. The sheer maritime expanse of the Pacific is filled with dangerous flashpoints such as the South China Sea, Senkaku Islands near Japan, and of course Taiwan. Any great power confrontation in the Pacific would rely heavily upon the U.S. Navy’s ability to project and sustain power from the sea. The ESB platform designs and technological configurations seem to have been evolved in part for this reason.

“In 2019, the Navy made the decision to commission all Expeditionary Sea Base ships to allow them to conduct a broader and more lethal mission set, compared to original plans for them to operate with a USNS designation,” the Navy statement explains.

The U.S. has forces in Japan and South Korea, but any kind of effective rapid-reaction force, supported by close-in command and control, would rely heavily upon maritime presence. An ESB, therefore, could function as a communications hub for maneuvering surface and air drones, surface ships, and sub-hunting helicopters. As platforms able to launch helicopters, ESBs could move into position to support amphibious forces both during attack and after landing by carrying supplies, surveilling the surface with sub-hunting sonobuoys, and even performing MEDEVAC missions as needed during an amphibious attack. Sailors, Marines, or soldiers injured in an amphibious assault may have few options when it comes to receiving care, as hospital ships may be ill-equipped to operate closer to shore. With substantial berthing capability, ESBs could launch helicopters to pick up injured servicemembers and then potentially stabilize or treat them aboard the ship.

The evolution of ESB is consistent with the Marine Corps' broader strategic shift back to its maritime roots following fifteen years of predominantly land-based counterinsurgency missions in Iraq and Afghanistan. With a “sea-basing” mission focus, ESBs could operate as a key “node” within a dispersed, expansive area of operations spread across hundreds of miles of ocean territory.