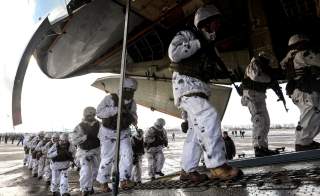 Key Point: Russia could absorb the Baltic states in a matter of days.

In February 2016, the influential RAND Corporation — a think tank closely aligned with the U.S. Air Force — published a paper in which it warned that a Russian invasion of the Baltic States could reach the capitals of Latvia and Estonia in less than three days even with a week of warning.

But that might underestimate how quickly Russia could overrun the region, were the Kremlin to send the bulk of its airborne forces and seize the element of surprise. It’s possible a Russian victory could come within hours, not days.

How would such an invasion unfold? A missile barrage and air strikes at dawn, crippling the Baltic States’ defenses, would precede a large-scale airborne operation supported by a small-scale land intrusion into Lithuania from Russia’s enclave in Kaliningrad.

Before the alliance could understand — let alone react to — what was happening, it’d be over.

Impossible? Let’s have a look at the figures.

Estonia has 5,300 active duty land troops as of 2016, according to the International Institute for Strategic Studies. Latvia has 4,450 active ground troops and Lithuania has 6,000, which gives the Baltic States a combined 15,750 soldiers.

To be sure, these numbers don’t include naval and air force personnel, which are relatively small in size. It also doesn’t count reservists, paramilitary forces and allied NATO troops who regularly rotate through the region. Estonia can call on 12,000 paramilitary members of the Estonian Defense League, and Lithuania has 11,300 militia fighters, according to the IISS.

The Russian Airborne Troops alone consist of four divisions and six brigades/regiments, totaling more than 45,000 men. These soldiers are better equipped and trained than their potential opponents and will be able to count on overwhelming Russian air superiority for at least several days.

However, Russia is not able to deploy that entire force at once, even if it wanted to. The bottleneck is transport aviation. A study by the author of Russia’s active transport aircraft, their transport capacities and availability rates reveals that, in theory, the Russian military — when working at maximum capacity — could move half of its paratroopers … at best.

Russia typically relies on four-engine Ilyushin Il-76 transport planes for dropping its blue-beret paratroopers during training exercises. However, we cannot exclude the possibility of Russian airborne troops flying into battle aboard other types of aircraft — at least toward captured airfields.

Which doesn’t mean Russia will conduct an airborne operation in this manner were it to go to war. But it’s within the realm of possibility that Russia could, at the least, strike with an airborne force of around 10,000 men were it to deploy almost its entire fleet of 91 Il-76s.

Would the Russian Army be operationally capable of conducting such a large airborne operation? Well, its airborne forces certainly train to do exactly that.

In one October 2015 exercise, Russia brought 10,000 paratroopers in the Central Military District to a state of combat readiness within 24 hours before moving them by air. In 2016, Russia carried out no fewer than 18 large exercises which either included or were solely conducted by the airborne forces.

The largest 2016 airborne exercise involved more than 30,000 soldiers from Russia’s Western Military District between March 22-24. The exercise included 3,800 military vehicles and more than 100 attack helicopters and warplanes. However, not all of the soldiers in this exercise were air-dropped.

Additionally, the Kaliningrad enclave holds a formidable military presence consisting of two motorized rifle brigades and a single marine infantry brigade — a total of around 14,000 soldiers supported by an artillery brigade. Were the Kremlin to further bolster its forces, it could call on at least 14 more battalions from the Russian Western Military District — including four tank battalions.

Even if we don’t include casualties caused by the preliminary strikes, the Russian Army would begin the conflict with an enormous numerical advantage in terms of soldiers and the quality of equipment, while at the same time operating with air superiority.

Russian air superiority is crucial to a successful surprise attack — but the Kremlin’s advantage here is practically guaranteed in the short term. Were Sweden and Finland to stay neutral, and neither are members of NATO, the Western alliance’s access to the air space over the Baltics would be severely limited within the first few hours, if not days, after the start of an invasion.

Regardless, the decisive factor would be surprise and the effectiveness of the preliminary strikes, which if successful could throw the Baltic States’ regular forces into disarray.

To give one example, the garrison of the Estonian Kuperjanov Infantry Battalion located in Võru is just 50 miles away from the Russian base in Pskov. The range of 9M528 rockets fired from the BM-30 Smerch is 55 miles.

RAND’s study also assumed Sweden would allow NATO to use its territory as a base for the alliance’s combat aircraft. Such a move would instantly place Sweden under the threat of retaliation, including the nuclear option. The alliance should not take Swedish cooperation as a given.

Russia seizing the element of surprise would also be critical to prevent the Baltic States from mobilizing their paramilitaries and reserves. And with defenses shattered, communication lanes and key infrastructure either knocked out or under Russian control, the region’s governments would be under tremendous pressure to surrender — potentially within mere hours of the first missiles and paratroopers landing on Baltic soil.

And what about Poland? If during the early hours of an operation, Russia were not to attack Polish territory, should Warsaw fulfill its responsibilities under the NATO charter? Should it launch a counterattack on its own?

Should Poland attack Kaliningrad and face the possibility of a Russian stand-off attack on its infrastructure? Or maybe even a nuclear strike? Such moves would also lead to a halt of Russian oil and gas, of which Poland is very dependent.

A day, or three, of hesitation would be all that Russia needs to bring its regular army units into the Baltic capitals and solidify its presence.

Could NATO avoid such a disaster? Yes — through deterrence. The alliance’s ability to retaliate, and having the political will to do so, is key to forcing Russia to weigh any aggressive action very carefully.

Is the presented scenario a purely fictional one? Hopefully.

It’s unlikely Russia will undertake direct, aggressive military action against a NATO member state. However, as events of the recent years prove, even the most unlikely scenarios can come true.

This piece was first featured in January 2017 and is being republished due to reader's interest.