The Pattern 1914 Rifle Fired Its War Into The History Books 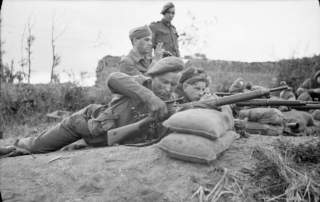 Key point: As a sniper rifle, the P14 was markedly superior to almost any other on the front.

While sniper rifles existed before World War I, they really came into their own in the trenches of the Great War. Precise rifles with telescopic sights were critical tools when it came to picking off enemy soldiers from trench to trench. But of all the sniper rifles developed during the Great War, one stands above the rest. A German design adapted by the British and built by Americans, the Enfield Pattern 1914 rifle is considered by many historians to be the best sniper rifle of World War I.

From the outset, the Pattern 1914 rifle was designed for accuracy. During the Boer Wars around the turn of the twentieth century, British troops faced Boers armed with Mauser rifles, which were far more accurate than the Lee-Enfields they were armed with. As a result, the British Army began looking into their own version of the Mauser.

The first British Mauser, and the predecessor of the Pattern 1914 was the Pattern 1913. The Pattern 1913 was designed hand in hand with a new round, which used a smaller bullet than the then standard .303 to shoot flatter and faster. The action itself was based on the Mauser, with two frontal locking lugs and a claw extractor. However, many little details were changed to adapt to British doctrine. The rifle was cock-on-closing like the Lee-Enfield and Swedish Mausers to speed rapid fire, and the bolt handle was angled to be near the shooter’s hand for easy actuation, in contrast to the straight bolt handles of most Mausers of the era.

The Pattern 1913 also added aperture sights near the shooter’s face. This gave it a longer sight radius and thus greater practical accuracy than the Gewehr 98 or Lee-Enfield, which both had leaf or notch sights halfway down the rifle.

However, the entry of Great Britain into WWI killed all plans to adopt the new cartridge and the Pattern 1913 rifle. But as the war dragged on, existing stocks of Lee-Enfields dwindled, and more small arms were needed to arm soldiers at the front. British engineers quickly rechambered the Pattern 1913 in the standard .303 British caliber, which resulted in the Pattern 1914.

American manufacturers, namely Remington and Winchester were contracted to produce the Pattern 1914 for the British government. The contract was a success, with over one million P14s being built and shipped to Britain. The P14 also served as the basis of the P17 Enfield, which was a rechambering of the rifle into .30-06 for the American Expeditionary Forces.

As a sniper rifle, the P14 was markedly superior to almost any other on the front. The design of the receiver allowed for a scope to be centrally mounted over bore of the rifle, in contrast to many other designs of the era which had offset scopes which required complex parallax adjustments. The cock on closing allowed for faster rates of fire than German rifles. Finally, the rifle featured an easily accessible safety which could be rapidly activated or deactivated with the shooter’s thumb.

The design was also safer and more durable than the Canadian Ross Rifle, which while being superbly fast and accurate due to its straight pull design was not known for rugged reliability in the field. The Ross could also be misassembled in a way that shot the bolt straight back at the shooter’s face.

The earlier Lee-Enfields were still considered to be a better general-purpose rifle due to their larger magazine capacity of ten rounds and lighter weight. Many features pioneered that were pioneered on the P14 would make their way onto the Lee-Enfield in the later Lee-Enfield No. 4 model that saw service in World War II.